Do a quick internet search to find numerous articles on the dangers of hormone fed animals and the meat that is consumed from such animals. Most cattle used for beef today are given hormones to produce larger animals and thus more meat. The hormones are still contained in the meat when it is sold in stores and served on our table. The same is true for the milk from dairy cows that are injected with hormones.

Though most scientific studies completed on a large scale did not find that the hormones in cattle and other meats affected humans, smaller, independent studies showed a link to higher rates of cancer in individuals who consumed average to large amounts of hormone fed meat. Though nothing has been confirmed, awareness has been raised and alternatives to hormone fed meats are available. 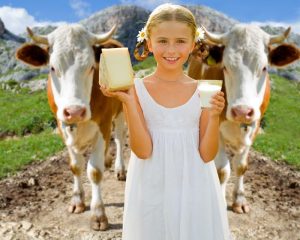 Typically, there are two major alternatives, short of becoming vegetarian or vegan. The two alternatives are corn fed or grass fed meat. This is concerned with how the animals, typically cows, are fed. Grass fed cattle tend to eat mostly grass while roaming in a field. Corn or grain fed animals are given corn or soy based products as a main food source. Most cattle get their start the same way, born in the spring and allowed to drink from their mothers until they can eat grass, which lasts for about six to twelve months before being moved to a feed lot. Feed lots tend to be nasty places that are overcrowded and cows are stuffed full of corn or soy based foods to fatten them up quickly. The cows are often also given hormones and antibiotics to stay healthy in the unsanitary conditions. This is then passed on to the consumer.

Grass fed cows tend to live on grass for the rest of their lives. This may not be the only food they consume, but it should be the predominant diet. Grass fed cows tend to have less fat overall with higher levels of Omega 3s and conjugated linoleic acid (CLA). This is associated with reduced body fat and other beneficial effects.

Since the studies are not conclusive and red meat, within reason, can offer some benefits, the choice is up to the consumer. Will you start looking for grass fed beef and other meats in the future?

How to Make Sure You Get Your Stimulus Check