Why Octopuses Are Scary Smart

Why octopuses are scary smart: You probably know that octopuses are pretty smart for squishy, ocean-dwelling creatures without a backbone. Did you know just how smart they are? Octopuses can solve mazes and remember how they solved them. They also play, in association with intelligent animals like dogs, chimps, and humans. They can quickly disassemble anything that ends up in their grip, including robots and water filters. One octopus who lived in a New Zealand aquarium, named Inky, escaped his tank and found a drainage hole that let him return to the ocean. Research done in the last 5 years has also revealed that octopus can use coconuts and shells as tools before only seen in mammals.

Of all the creatures in the sea, the octopus is without a doubt the most intelligent. For years, scientists haven’t been sure how intelligent they are. Research has shown that the octopus is completely unique from any other creature we know of. Though the octopus displays “human-like” intelligence, the structure of the octopus brain is completely differently. This makes sense, since they were the first intelligent creature to evolve, long before the human brain developed. Some have (jokingly) wondered if octopi are actually aliens come to study us. 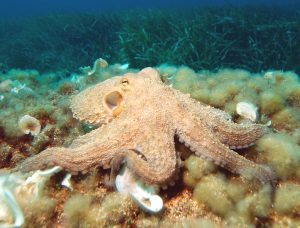 Why Octopuses Are Scary Smart

Aliens of the ocean?

By mapping the genome of the octopus’ genetic code all 2.7 billion “letters” scientists found genes that contribute to the octopus’ ability to change color, incredible eyesight, and unusual predatory behaviors. Within the code, there are tons of “instructions” about neuron-cell growth and interaction. This means an octopus can evolve and adapt very quickly. This could explain why octopuses are so good at solving problems. They can open jars or remember a maze. Scientists also found neurons in the octopus’ individual arms. It’s as if each arm “thinks” on its own and processes information. A severed octopus arm will still react to stimuli as if it was still attached.

As research continues and we learn more about the octopus, will there come a day when eating octopus is considered unethical? After all, we tend to shy away from eating animals that exhibit human-like qualities. Only time will tell.

How to Train Your Dog

Is the Covid-19 Pandemic Changing our Perception of Time?