Wine enthusiasts are a traveling lot. Willing to fly to Tuscany at the sniff of a good Brunello di Montalcino, they will follow their noses into the dark hinterland of Silverpine Forest if it means a memorable tasting. That’s why Gildshire’s Travel Magazine (and our Food Magazine, for that matter) loves the wine crowd so much. It is for their palate’s pleasure we offer this examination of wine regions that may have slipped under their radar. Whether you are a casual wine enthusiast, a connoisseur, or a sommelier, join us on the journey. We can’t wait to show you what we have found.

Texas Hill Country: The land known for Lone Star Beer, high school football and rodeo won’t immediately spring to mind when a good Cabernet Sauvignon is the goal, but maybe it should. A drive from Austin to Brady and back to Canyon Lake will encompass some of the best grapes in the United States. Fredericksburg is one of our favorite small Texas towns. That’s where they started the Fredericksburg Food and Wine Fest thirty years ago and it is still going strong. For our money, the Fest is the Lone Star State’s best celebration of traditional Texas fare with a splash of vino. Less than 12,000 in population, Fredericksburg is home to 200-acre Wildseed Farms. That’s where Wedding Oak Winery is located, and where we go every chance we get. 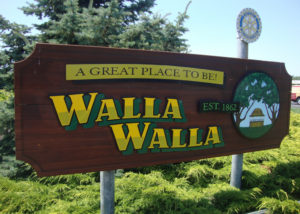 Walla Walla wines are among the region’s finest.

Walla Walla, Washington: When they talk about the town so great they named it twice, Walla Walla is always the town that comes to our mind. We love the rolling hills, the waving wheat…and the wine! We aren’t alone. Lovers of the expertly fermented grape are quickly making it a valued stop on their journey through the wine regions of the Pacific Northwest. Yes, the city that was once known only for sweet onions and the State penitentiary has shouldered its way into the wine guidebooks. Leonetti Cellars became the first commercial Walla Walla winery in 1974, and it is still one of the area’s best. However, visitors to Walla Walla during this time of year should not miss Fall Release Weekend, Nov. 3-5. Next June, the Celebrate Walla Walla Wine event, features seminars, tastings and dinners with wine pairings. Walla squared just isn’t square anymore!

Come for Susie, but stay for the wine regions’ best.

Lodi, California: A mere 67 miles from Napa finds a traveler in California’s Central Valley and the town of Lodi. For years, the wine trade in Lodi was overshadowed by the growers in the wine regions of Napa, Sonoma, and Mendocino Counties. That has all changed, and Klinker Brick and Michael David Wineries are two of the reasons for the change. Michael David is a particular favorite of Gildshire’s, because of its signature 7 Deadly Zins varieties of zinfandel. Acquiesce Winery, started simply as a hobby by Susan Tipton, features premium whites made from imported French vines. These include award-winning Grenache Blancs and Viogniers.

Loudoun County, Virginia: Just a few miles northwest of our nation’s capital find some of the better wines we’ve tasted in one of our favorite wine regions. Loudoun County is home to family-operated Doukénie Winery. Lakeside and amid rolling hills in Purcellville, they host barrel tastings and teach classes in the blending arts.  Its offerings include a Cabernet Franc melded with some lesser-known Petit Verdot. Meanwhile, North Gate Vineyard features a lovely tasting room in which live music can often be enjoyed. One of North Gate’s claims to fame are its crisp, white Rkatsiteli, crafted from grapes tracing their origins to the Republic of Georgia.

The lush and verdant Willamette Valley.

Oregon’s Willamette Valley: A half century ago this 100-mile stretch between Portland and Eugene, Oregon sprouted its first vines. Now, there are over 500 wineries in the area. We call that a growth industry, and the wine-loving tourists who visit Oregon each year are a growing cadre, as well. How much positive vibe is being felt in the Willamette Valley? Well,  Wine Enthusiast Magazine named this area its 2016 Wine Region of the Year. The large Erath Winery in Dundee has a walk-in tasting room, but some of our favorite experiences are the small and intimate tasting sessions held at Patricia Green Cellars outside Newburg. Urban and rural Oregon may not agree on much, but they agree on where to go to get a good glass of wine. That would be the Willamette Valley, where the state knits together.

Did you see anywhere that suits you? Likely, more than one good place to go, am I right? Try one or try them all. Similar enough to be familiar, they are unique enough to make memories. Aren’t memories what life, and love, are all about? Enjoy responsibly, but enjoy fully the bounty of the vine. That’s our advice.