Ask a dozen movie fans about the expression “cult classic.” The answers will vary, but they can tell you about one that means something special to them. Maybe it was a midnight movie, seen the first week away at college. Perhaps it was a movie so laughable the dialogue became forever a family touchstone. It might even have been a drive-in feature at which the biggest thrills weren’t even on screen. We all have our favorites, but there is one thing a cult classic doesn’t have to be to earn the title. It doesn’t have to be good. In fact, at times it is better if the movie is genuinely bad. That’s part of the “cult” aspect. Gildshire Magazines wanted to scour the movie-scape for the worst movies out there that are in the “cult classic” category. We’re willing to bet one of your guilty pleasures is on here.

8. The Brood (1979): How many of us have gotten so mad we would like to conjure up things that would attack the people who are the object of our rage. Director David Cronenberg was going through a divorce when he made “The Brood”…and it shows. He tapped into the bloody-eyed rage most of us went through during that trying time and turned it into one of the worst movies. Rotten Tomatoes gave it a 78, but of those who saw it, only 67% liked The Brood. It stars Oliver Reed and Samantha Eggar. 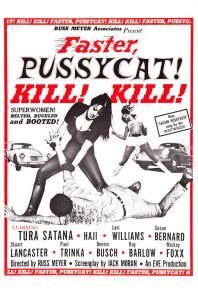 6. Mothra (1961): We all wish we could travel with a few sycophants, and they wouldn’t even need to have wings. They make us feel better about ourselves on bad hair days. This movie is about, let’s face it, larva. Sure, she becomes a giant moth, but by then we have suspended our sense of reality. She could have turned into a screwdriver for all we care. All that matters is her kick-ass quotient, which is considerable. Rotten Tomatoes gave it a score of 73, but those who saw it liked it only 62% of the time. It stars Jerry Ito and Ken Uehara. 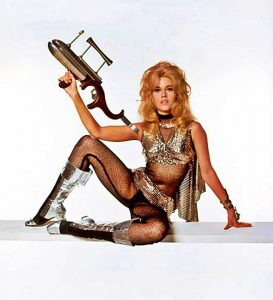 Director Roger Vadim cast his then-wife in the starring role. One guesses it was his way of saying “I have her and you don’t” to every man in the audience. Rotten Tomatoes scores Barbarella 73, but audiences who saw it appreciated the experience just 58% of the time. It stars Jane Fonda and John Philip Law.

4. Sweet Sweetback’s Baadasssss Song (1971): Bill Cosby financed this beauty before he turned to other pursuits. Before Richard Roundtree was Shaft, Melvin Van Peebles was Sweetback. 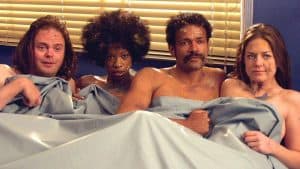 Is it just me or does the person on the far left look like Jack Black?

He avenged a black man who had been brutalized by two white cops and had to go on the run for his trouble. At the time it was released this move was  X-Rated. Rotten Tomatoes scored it at 71, but only 47% of the ticket-buyers believed they made a wise purchase. It also stars Simon Chuckster.

3. The Toxic Avenger (1984): You’ve heard the expression “A face only a mother could love.” Such is the case for the ill-fated custodial engineer who escapes harm by jumping, face first, into a toxic waste truck. Apparently, there is nothing like a face melted into pulp to turn someone into a buffed out Lord of Retribution. Something tells me the exchange wouldn’t be worth it, but maybe that’s just me. Rotten Tomatoes gave The Toxic Avenger a tepid 70. Those who saw it gave it a tepid-er 60.

2. Plan 9 From Outer Space (1979): Historical revisionists have tried to resurrect the career of Ed Wood, and this movie in particular. Partially successfully, we must say. As a movie, though, this thing sucks out loud! Come on! 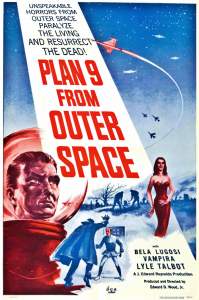 If you thought Plan 9 was bad, then you don’t want to know about Plan 10.

One of the previous eight plans must have had more going for it. Space aliens come to Earth in flying saucers (paper plates) and raise the dead in hopes of overtaking the planet. I think they were trying to protect the dead from this movie. Rotten Tomatoes gave it an extraordinarily charitable 67. Moviegoers voted it at 45, which is, in our opinion, charitable, as well. Truly one of the worst movies you’ve ever loved, it stars Bela Lugosi along with Lyle Talbot.

1. Mommie Dearest (1981):  Most of the worst movies were meant to be quality entertainment. One suspects entertainment and even profit were secondary in the mind of Christina Crawford when she penned Mommie Dearest. She had few things to get off her chest. This autobiographical tale painted Hollywood legend Joan Crawford in a bad light, apparently well-deserved. 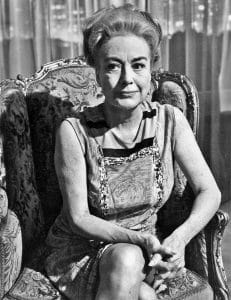 No one who saw the movie can ever see a wire hanger without remembering Joan Crawford’s opinion of them. It stars a scene-chewing Faye Dunaway, along with Diana Scarwid. Rotten Tomatoes gave it a score of 55, but moviegoers gave it a 72. That makes it the definition of one of the worst movies you’ve ever loved, as well as one we are proud to feature.

Did your favorite make the list, or should we have included The Blob, The Fly, or Death Race 2000? That’s the thing about the worst movies you’ve ever loved. There are so many from which to choose.

Up-And-Coming Flavor Trends To Get Excited About

Words You are (Probably) Mispronouncing