He’s the most subscribed channel on YouTube with a staggering 50+ million subscribers. He makes millions every year, and has appeared on The Late Show with Stephen Colbert. His name is Felix Kjellberg, his handle is PewDiePie, and he plays video games. 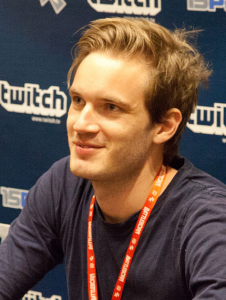 Felix was born in Gothenburg, Sweden, and had an interest in art and video games. He would spend a lot of time drawing video game characters in elementary school, and then as a high schooler, he would ditch class to play video games at Internet cafes. In 2008, he went to get a degree at a university, but was quickly bored. When he left school, his parents refused to support him, so he had to make money working at a hot dog stand and selling his Photoshop art. With the funds he raised, he was able to buy a computer to start working on YouTube videos.

When he signed up, Felix knew he wanted his YouTube to be about video games. He originally chose the name “PewDie,” because video game lasers make a “pew” sound, and die, of course, means, to die. He promptly lost his password, so he signed up again as “PewDiePie.” He played horror video games and talked to his viewers as he did so. This style of video is known as “Let’s Play.” What made PewDiePie unique is that he never just played through the games talking, he would talk to the viewers like they were there, use funny voices, and add lots of video-editing reactions and graphics. In addition to his main video posts, he has been posting vlogs since 2011 and comedy shorts. As his influence grew, he also began playing video games from indie developers looking for a larger audience.

PewDiePie has been extremely successful. In 2014, Disney’s Maker studio created a PewDiePie app for the iPhone that lets users watch and share his videos, and customize feeds of their favorite PewDiePie videos. In 2012, Forbes reported that the 25-year old had earned $12 million, and in 2016, he became the first YouTube channel to hit 50 million subscribers. 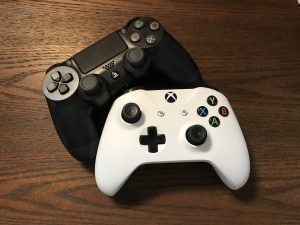 For all his popularity, PewDiePie is not without flaws. He has a bit of a trolling reputation, which is when a person makes purposely offensive jokes and claims that they don’t reflect their actual beliefs. Trolls like to stir the pot and provoke the masses. At the end of 2016, PewDiePie said he was going to delete his channel once it hit 50 million subscribers. He wasn’t clear about why, but he did complain about YouTube and its management. He tweeted that he would delete it at 5pm the day after hitting the milestone, but he ended up not doing it. Detractors found his stunt stupid. That’s harmless enough, but just a few days later, he featured a video where he reviewed the website Fiverr. This website lets people sell any service for just $5. PewDiePie found two guys who would write anything on a sign and film themselves dancing with it. PewDiePie decided to tell them to write “DEATH TO ALL JEWS.” When they sent him the result, he filmed his reaction.

The backlash was immediate, and PewDiePie defended himself by saying he just wanted to show how ridiculous the internet could be. This stunt opened a can of worms where people began to realize that PewDiePie actually has a history of white supremacist and anti-Semitic “jokes” that appeared on YouTube, Twitter, and Reddit. Maker Studios cut ties with him, and PewDiePie continues to face angry fans and fans who think he’s serious. The Daily Stormer, a Neo-Nazi online magazine, has started to call itself “the world’s #1 PewDiePie fansite,” and praising the YouTuber. It may be too late for PewDiePie to revamp his image, even with support from Jewish friends and fans who say he’s joking. Maybe the lesson here is that some things are just too touchy to be joked about.