While the buzz in the crowd at a Zang Toi fashion show is always about the coterie about to be seen on the runway, this month much of the buzz was about who was present. On Saturday, Feb. 15, the Malaysian designer had a guest that made news at his fall 2020 runway show. Rudolph Giuliani, the former NYC Mayor and a private attorney for President Donald J. Trump was lunching with his friend, Fox News contributor David Webb. The discussion concluded with Giuliani inviting himself to the Zang Toi show that evening. Gildshire’s Lev Radin was along, as well. The show was a glittering display of fashion and Zang Toi’s friends.

“Giuliani heard that David was coming to my show and said he wanted to come, too,” Toi said, adding, “He told me after the show that he was having a lot of fun.” 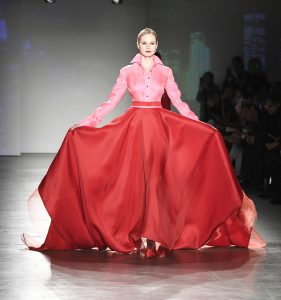 In a way, no one should have been surprised, and Zang Toi least of all. The designer’s runway shows have become something of a friends’ event for Trump. The audience at Toi‘s spring show last September was a GOP who’s who, underscored by the venue at the Women’s National Republican Club at 3 West 51st Street.

Toi’s work with the Trump clan is a long-standing one. “I’ve been dressing Ivana [Trump] since 1995,” he said. “She’s one of my most loyal customers and friends.

“Ivana hosted ‘Young Man,’” ten years ago. In that show, Mr. Trump’s ex selected a boyfriend for a 40-year-old bachelorette.

“Don’t waste your money with a costume designer, Zang will make a whole wardrobe for me,” Ivana Trump reportedly said.

That said, Toi doesn’t discriminate when it comes to Trump’s ex-wives. Marla Maples attended last September’s Toi show and showed up this time to support the designer. 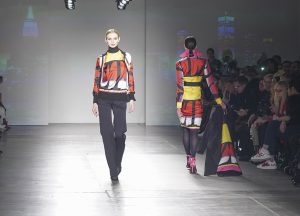 “I never met Don Jr. until recently. {Fox News personality} Kimberly Guilfoyle brought him to the last show. I think working-class America can resonate with them because they’re not snooty,” Toi said. “Don Jr. and Kimberly were so sad that they couldn’t come this time. Both of them were keynote speakers for their father in Reno, Nev. They work so hard on behalf of their father. Even with all their money, they travel coach class.”

While some may differ with Toi’s political companions, none will ever say he is lazy. The morning after the show, he was at his store writing orders. He said, “I’ll be here until 7 or 8 p.m. today and tomorrow. Saks Fifth Avenue in San Antonio on Thursday will recreate the fashion show. They’re going to close off the first floor. I’ll be on the road the next day going to Saks Fifth Avenue stores across the country.” 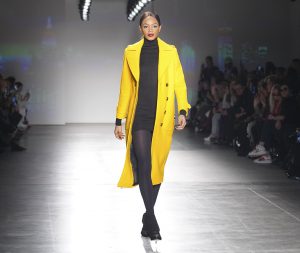 The next event Zang Toi fashionistas anticipate will be April 14. That’s when Toi’s most recent runway show will be fully recreated in Nashville. Looking forward to that show, Toi said “The Nashville Symphony holds 700 people. This year, the symphony is celebrating its 15th anniversary. There will be a live symphony orchestra performing ‘New York, New York.’ My show this year was inspired by my adopted home, New York.”

Gildshire continues to follow Zang Toi and his wildly successful line of clothing and fashion events. Certainly, the Nashville event will exceed expectations. That is the Zang Toi way.