Home » Ford Fights Back: “We’re Not Killing the Car”

Ford Motor Company knows what it is like to take the heat. When their Pinto developed the wholly unpleasant habit of exploding on rear-impact the company heard about it. Even earlier, when the Edsel was supposed to compete with Cadillac and instead competed with nothing, the company heard about that, too. Since those events, though, Ford has gone on its merry way, making cars and trucks that people want to drive. Their latest announcement, though, concerning the scuttling of most of their car lineup, has drawn, if not fire, at least puzzlement. Gildshire and other car magazines online pondered the issue just two weeks ago. Motor1 devoted several articles to the matter. In response to the blowback, Ford fights back. “we’re not killing the car,” they say. “We’re moving to a modern version.”

Now, to say “Ford fights back” isn’t to indicate that the company is issuing angry directives. That isn’t the case. However, it was in the speedy response to the questioners that Ford fights back is applicable. Carmakers, like most major industries, tend to respond slowly, or not at all, to publicity that isn’t great. In this case, Ford was front and center.

At issue, in part, is the question of the SUV. Is it a car? Or, is it something else? Because, if it is a car then Ford will be building cars with a feverishness usually only seen by beavers. If by “car” we mean coupe, sedan, and convertible then yes, Ford is killing the car. 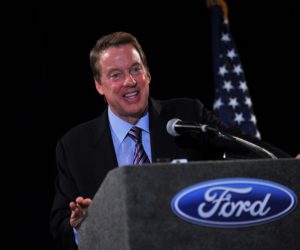 CEO Bill Ford has been the face of “Ford fights back.”

By 2020, about 90% of the Ford garage will be SUVs and pickup trucks. The company intends to promote the freshest lineup of those kinds of vehicles by the beginning of the next decade. These include newbies, such as a Mustang-inspired e-car SUV. It is dubbed the Mach 1. There will be a new Bronco, as well as a smaller off-road CUV, temporarily named the Baby Bronco.

Ford executives are roundly displeased by the negative reaction from car enthusiasts and the car press. CEO Bill Ford points his finger squarely at the media, claiming “negativity!” He said recently, “The headlines look like Ford’s retreating. In fact, nothing could be further from the truth.”

Does Bill Ford speak the truth? Or, has Ford Motor Company gone away from its original mission? The next few years will tell that tale. Gildshire and other car magazines online will be watching.