Today, Gildshire remembers actor/comedian Jerry Stiller who died at the age of 92, Monday, May 11 of natural causes. Ben Stiller confirmed his father’s death in the early hours of Monday morning, writing on Twitter:

“I’m sad to say that my father, Jerry Stiller, passed away from natural causes. He was a great dad and grandfather, and the most dedicated husband to Anne for about 62 years. Love you Dad.”

As Stiller and Meara

Jerry Stiller first came to prominence performing comedy routines with Anne Meara, before beginning a de facto second career on Broadway and as a guest-star on various TV series.

Before weekly television, he and Meara were a headline comedy act. They appeared on “The Ed Sullivan Show” 36 times. Stiller and Meara were also a part of the comedy troupe that later became Second City. 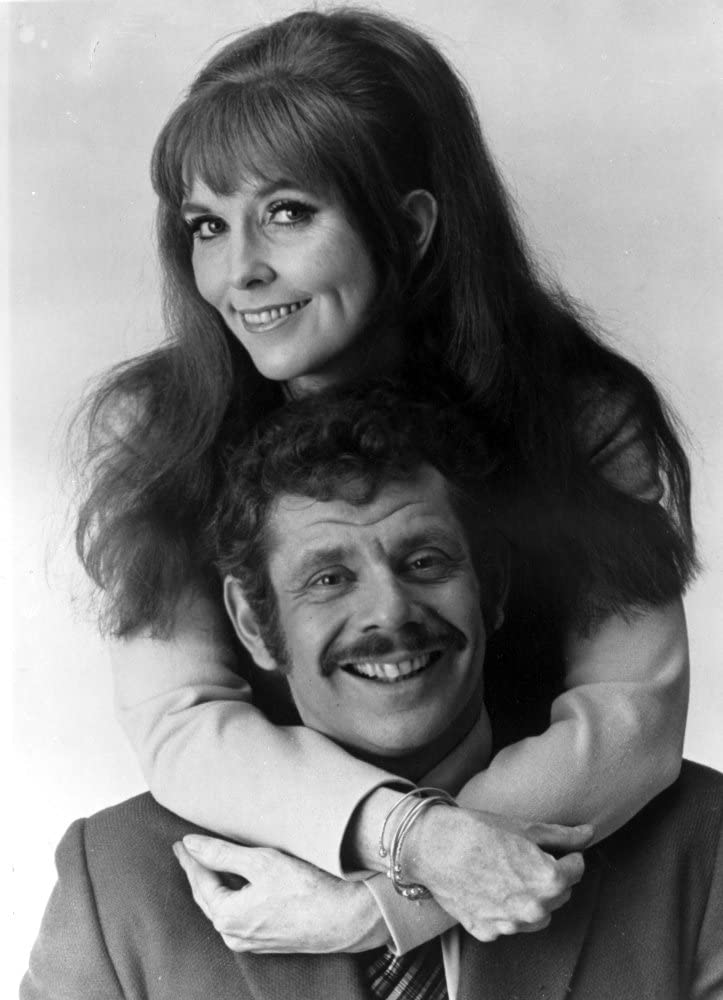 Actor/comedian Jerry Stiller with his wife Anne Meara, during the hey-day of their comedy team.

For many years the team of Stiller and Meara was a familiar one in east coast nightclubs, on the so-called Borscht Belt comedy circuit in the Catskills, on television variety and talk shows, and in TV and radio commercials, often for Amalgamated Bank and Blue Nun wines.

Years after the act stopped performing publically, Mr. Stiller captured a new generation of fans as Frank Costanza. He was the short-tempered and off-kilter father of Jason Alexander’s George Costanza, on the NBC series “Seinfeld.”

Stiller was nominated for a primetime Emmy in recognition of his role as Costanza. Though Jerry was in fewer than 30 of the 180 episodes of “Seinfeld” and did not appear until Season Five he was considered an important reason for the show’s appeal. He Emmy nomination was for the series’ second-to-last season in 1997.

The 2001 comedy film “Zoolander,” was a real family affair. Jerry played Maury Ballstein, Zoolander’s manager, to Ben in the titular role. As in everything he attempted, Jerry Stiller’s work was lauded by the critics. Ben’s wife Christine Taylor also appeared in that movie.

Jerry and his son first acted together in the comedy “Hot Pursuit.” In Ben’s maiden feature directorial job, 1994’s “Reality Bites,” Anne Meara and Ben’s sister Amy had roles, though Jerry was absent.

As a Dramatic Actor

But, Stiller could do dramatic roles, and do them well. He appeared as Police Lt. Rico Patrone in the classic 70s thriller “The Taking of Pelham One Two Three,” and more recently as a judge on TV’s “The Good Wife.”

Comedy Central produced a Friars’ Club Roast of Jerry Stiller in 1999. The roasters came from many generations of performers, ranging from Meara and Alan King on the older end of the spectrum to Sandra Bernhard, Harvey Keitel, Jason Alexander, and Michael McKean midrange, to son Ben from the younger set.

Stiller received a Grammy nomination in 2001 for the best-spoken-word album. That was for “Married to Laughter: A Love Story Featuring Anne Meara.”

Actor/comedian Jerry Stiller. A life well-lived comes to a graceful curtain fall at 92 years of age. He will be missed, but never forgotten.

How to Staycation During This Time of Social Distancing

The Secrets to a Successful Marriage