Let’s try a little experiment that starts with turning off whatever is making noise where you are. Open a window and sit back in your chair, because something is about to happen. A bird will chirp. Another one will call back. Another will chime in. Isn’t that great? It’s calming. Perhaps you should record it for later because the birds of North America are in trouble! According to studies by Science Daily and The Audubon Society, certain avian species are already dying off from global warming. Gildshire Magazines‘ Mia Russell recently wrote a great article on the macro aspects of climate change. Today, we drill down on a micro aspect. Namely, the sad fate of the North American bird population.

As climate change and the global warming associated with it accelerates, certain species feel the pinch earlier than others. Human beings, a major cause of the situation, will actually be slower to feel the effects. Our superior size and adaptation mechanisms will save us. Unfortunately, creatures both innocent and smaller than us will bear the early brunt of the fast-heating planet.

We’re all about silver linings and hope, but it is hard to be very optimistic given the mounting scientific evidence. By 2080, dozens of avian species across the country could be hurtling toward extinction, and not just the ones we already know are in trouble. The American Avocet and Yellow-headed Blackbird, the former a shore bird, the latter a common sight in the fertile eastern valleys of Washington, Oregon, and California, may not survive. 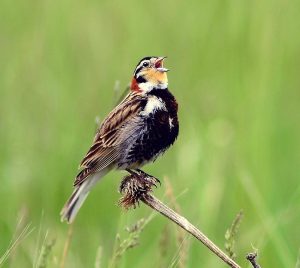 The bird situation in the Great Plains is no less drastic. The Chestnut Collared Longspur can expect 70% of its habitat to be unusable, and certain Mid-Continent sparrows will lose their breeding grounds entirely. Add to that what we already know about the impact of oil drilling operations in The Bakken, and their effects on prairie bird species.

Unfortunately, the story back East is no better. American Eastern Seaboard birds winter in Central America. Severe warming on the northern breeding grounds is already raising havoc with food sources on the wintering grounds.

Perhaps the saddest bird story, though, is found in the Mid-Atlantic and Appalachian regions. The deciduous forests of West Virginia, North Carolina, and Virginia are home to several species of vulnerable warblers. 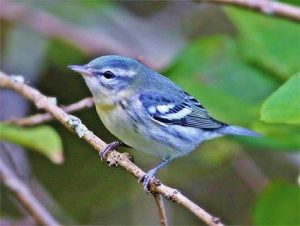 The tiny sky-blue Cerulean Warbler (pictured) nests high in treetops and is thought by some to be the fastest-declining songbird in North America. The Warbler’s summer habitat in Appalachia is fragmented by, among other things, coal mining. As the climate changes, much of the Cerulean Warbler’s current range is likely to become unsuitably wet and hot.

The children of children born today may never see 314 species of birds that we see today, and we know that the planet’s thermostat set to “high” will be the reason. Birds have evolutionary adaptive characteristics, just as humans do, but they aren’t equipped for the fast changes brought about by man-made climate change.

Just as is the case with all species, the trash eaters will survive, while the refined species will perish. If that isn’t a sobering thought, well, we don’t know sobering thoughts. At least it is good news for seagulls and that’s something, I guess.

For many years now, Science has told us that the ranges of bears, butterflies, and many other species are shifting toward the poles. We know that bird migrations are changing timing and course. There is no longer any doubt that pollinators are trying to adjust to new flowering schedules. These alarming observations across the realm of species are only the beginning.

Unfortunately, things may be worse than we know. In the case of most animal species, scientists need decades of detailed data. Fortunately for the scientific discipline, and perhaps the birds themselves, that isn’t the case when it comes to avian study.  Short-term conservation should target the times and places birds face their biggest threats. Knowing what lies ahead underscores the need for action right now to offset the impact of climate change.

Actions are a good idea! Decisions in the highest offices in our land are crucial, and we must be a voice in them. Our stewardship of Creation literally demands it, and so too does our well-being. The next time you open your window something besides traffic must be heard.

Thank you. Signed, The Birds.

Gildshire Goes to the Movies the Last Weekend in July