Electric cars have been around for a very long time. Long seen as oddities, primarily fit for enviro-nuts and kooks, they stayed in their lane, passed unnoticed by snarling gas-powered cars. Why couldn’t electric cars catch on? After all, no one enjoys the gasoline fill-up. Three factors stood in the way of the electric car. They were slow, had about enough range to take you around the block, and took forever to charge. Well, times they are a’changin. Electric cars are sprinting down the road at 100 mph. Soon, we will be at the tipping point in range the industry believes will be viable to the majority of the public. Namely, 400 miles of range on a single charge. What about the overnight charging time, you ask? Announced this week, and reported by Inside Evs, Honda’s quick charge EV is set to launch. Intrigued, Gildshire looked beyond the headlines.

According to reports, Honda is aiming for a 15-minute 100% recharge into Honda Fit batteries with a 150-mile range. How does that compare to the current industry standard? Fifteen minutes is around 48% of the current industry standard – 32 minutes for an 80% fill for ‘city’ EVs (think 2017 Nissan LEAF, Fiat 500e, etc). The current Honda recharge champion is the 2018 Fit, with a record 20 minutes to 90% full. 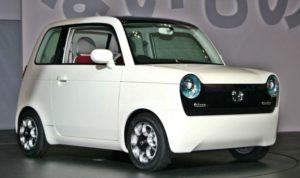 While analysts applaud the advancement, most also recognize the improvement as more incremental than transformative. Honda acknowledges it still has work to do to achieve even these numbers in the U.S. market. The Japanese version Honda Fit EV comes equipped with a CHAdeMO inlet (unlike the U.S. or European version) and an SCiB battery was capable of accepting accept a full 50 kW of power.

What is the secret to quick charge success? Is it a lightweight car? Is it aerodynamics? Actually, it isn’t either one. The secret of quick recharge is simply the right battery. It must be capable of fast charging at 4C current (a rated current four times the battery’s capacity) but also be energy dense enough to offer higher range. The battery pack capacity would need to be much higher than 20 kWh. The last obstacle may be the biggest one to Honda’s quick charge plans.

Renting A Friend In Japan