Home » Travel & Nature » How Do You Know If Your Dog Is Smart?

Are you a dog owner? If so, you’ve probably wondered where your pup ranks on the intelligence scale. The average dog is as smart as a two-year-old human. There are actually IQ tests for dogs, so you can get a good idea of how smart your dog is, and what kind of intelligence he or she has.

Before you try out a test, you should know how intelligence is understood when it comes to dogs. The basic types of smarts are instinctive and working/obedience intelligence. Instinctive intelligence is based on breed, so for example, dogs with naturally-better eyesight like Greyhounds will be good at visual-oriented tests, while dogs with really good noses (bloodhounds) excel at scent-based problem-solving. 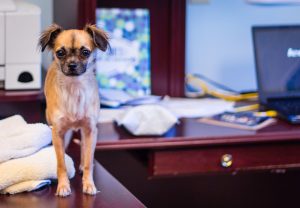 Working/obedience intelligence is based on how well a dog takes instruction. Dogs that are high in this area of intelligence are trained quickly and can remember a lot of commands. Border collies, poodles, and German Shepherds have the highest working/obedience IQs, while bulldogs and Afghan hounds have the lowest. Keep in mind, that doesn’t mean your dog is “dumb.” They might just be more rebellious and don’t want to listen to you.

Do you want to test your dog’s IQ? There are several tests you can try. Try not to overwhelm your dog, and make the tests like games, so your dog has fun. The full IQ test consists of five games. Here are a few of them:

Put a towel or blanket over your dog’s head. If she frees herself in less than 15 seconds, she gets three points. 15-30 seconds equals 2 points, and longer than 30 seconds is 1 point.

Put a treat under one of three buckets that are set up in a row. Show the dog which bucket the treat is under, and then turn her around for a few seconds. If she goes to the correct bucket for the treat right away, she gets 3 points; 2 points if it takes her two tries to find it; and if she looks under the right bucket last, 1 point.

Four Tips for Parents Who Want to Go Hiking with Children