For a long time, Hyundai has talked about their plans for the future. That, in itself, isn’t news. Carmakers love to talk about themselves and the historic next steps on the planning sheet. Hyundai, though, had a different sort of direction to chart. They were going to open a completely new line of dealerships, tasked to sell Hyundai’s luxury ride, the Genesis. Months before the hoopla of Opening Day, those plans have been scuttled. Gildshire and other car magazine websites are hot on the trail of the latest news. Among them, Roadshow by Cnet who helped with the research. 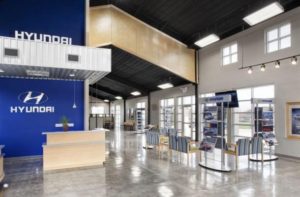 This Texas Hyundai shop is one with with Genesis dealerships embedded.

As you might guess, the parent company got some blowback from Hyundai dealers currently selling the Genesis. After negotiation and some lengthy back and forth, a new plan is in place. Now, the approximately 350 “Elite”-level Hyundai dealers currently selling Genesis G80 and G90 models will be able to continue doing so. However, they will need to sign new franchise agreements.

In those new franchise agreements are some hoops through which the dealers must jump. Retailers selling Genesis must have a separate facility exclusively for Genesis sales and service. Hyundai believes the separation will shield the Genesis from what internal memos call the “cheap and cheerful” image of the parent company.

Machinations aside, this is good news for the company and its potential high-end customers. There is a plan in place, and it involves a Genesis network offering luxury rides. Hyundai finally seems to have settled on a plan for the continued roll-out of the Genesis brand in America. That is something for which its dealers clamor. For too long, Hyundai’s corporate indecisiveness was counterproductive to its goals of establishing Genesis as a real luxury brand.

Will the calmer waters result in Land Office sales numbers? Well, we won’t know the answer to that for a year or more. But the news gives car magazine websites something on which to write besides recall numbers. That’s a step in the right direction.

All-Inclusive Vacation: Is This the Right Getaway For You?