Gildshire and the other top online business magazines aren’t all work and no play. We have summer vacations on the mind right now, and we bet you do, as well. However, the business side of us must caution that motorists in this country may as well get used to a hard fact. Expect to dive deeper into your wallet to fuel the summer vacation this year. The average cost of fuel will reach $2.74 by the 4th of July. That’s almost 13% higher than 2017’s summer season average of $2.40 a gallon. The $2.74 mark will be the spendiest pump price since summer 2015. That was the year summer gas hit a crazy $2.81 per gallon.

You don’t actually have to wait for the dubious pleasure of paying more at the pump. Fuel costs began to spike earlier this month. Crude oil costs leaped (OPEC says, “You’re welcome.”) when refineries began the transition toward “summer grade” gas. That’s the formulation that reduces summer air pollution. (The deadline to sell summer gas is June 1.) The annual switchover adversely affects supply during the transition. Less fuel in the supply line boosts gas prices just as consumers leave town for their summer getaways.

Just as your mileage may vary, what you pay for gas will vary depending on your ZIP Code. Folks who live on the west coast, along with supply-challenged Hawaii and Alaska, are already paying well over three bucks a gallon. Californians, in particular, saw $2.74 at the beginning of this article and said, “Lemme at it!” The Golden State pays the nation’s most egregious pump prices in the Lower 48. The average California price for a gallon of regular unleaded is $3.54, and that’s a month and a half before the summer price bump.

Add to that, some of the factory recommendations from the newer turbocharged engine carmakers. Those cars need the premium grade gas. So, add fifty cents to the per gallon price. It’s a good thing that car looks good in the driveway, because it may stay there a while.

We know that gas prices are volatile. Crude oil sells at high prices than previous years. Domestic gasoline demand was higher than normal much of this winter. Those are just two of the factors that are combining to drive gas prices up.

Based on their current predictions, the Energy Information Agency tells us average U.S. households will drop an additional $193 in their cars’ gas tanks this summer. Will that herd car buyers into smaller rides, as it did during the 2008-2009 budget crash? Experts say, “Not likely. They do not expect high gas prices to run SUV-crazed customers back to subcompacts anytime soon. 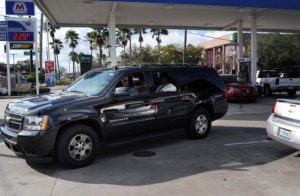 For some, summer vacation means gassing up the big car.

“Why not?” you ask. “Doesn’t a change back to smaller cars make sense?” You would be right in asking. American cars are, on average, twice the size of our European counterparts. Visitors from across the pond are amazed at the size of American cars.

But, compact SUVs and crossover car/SUVs are firmly ensconced as best-selling models listed in almost every car manufacturer’s lineup. Those and pickup trucks dominate dealership stock and sales. That won’t change anytime soon. Singles, young families, and retirees prefer those models for added comfort and utility. They will pay significantly higher fuel prices while enjoying the benefits that come with larger cars.

Certainly, compact cars continue to deliver better economy than SUVs and crossovers. Their lighter curb weights, along with sleeker aerodynamics make them summer vacation gas sippers, rather than summer vacation gas guzzlers. (The best get 40-50 highway mpg.) Even so, modern large cars are reasonably efficient, especially when compared to the Jeep Grand Cherokees of old. Now, the best non-hybrid SUVs and crossover models rate at around 34 miles per gallon on the Interstate. The difference between big cars and the Honda Fit comes to around $122 a year using current prices as our baseline.

Interestingly enough, a recent survey conducted by Triple-A suggests a quarter of the respondents would make vehicular lifestyle adjustments if prices reached $2.75 per gallon, and 40% suggested $3.00 would be a tipping point for them. That said, by a huge majority those questioned said higher fuel prices would cause them to combine errand trips or drive less. Just 46% said they would drive a fuel-efficient car.

So, enjoy your trip to the beach for summer vacation. Just remember to have extra room on the credit card for gas, in addition to sunscreen, pool toys, and ice cream cones. Oh, and bring your top online business magazines to the chaise lounge. You might as well read up on getting rich as you work on your tan.

Lincoln Goes All Out to Appeal to Car Buyers