The Twisty Tale of Labyrinths And Mazes

Home » Our World » The Twisty Tale of Labyrinths And Mazes

It’s Halloween soon, and that means corn mazes! Where did this tradition start? In fact, where did the concept of mazes start at all? It goes back thousands of years, to the time of the ancient Greeks and Egyptians. Back then, they weren’t actually called mazes, they were labyrinths. The difference is that a labyrinth consists of one long winding trail, and were originally not actually meant to confuse anyone. They were symbolic of a spiritual journey.

Herodotus describes the first labyrinth in Egypt around the 5th Century BCE. He said it consisted of a huge winding building, with thousands of rooms, some which were underground and held tombs. Another historian, Pliny, also talks about the labyrinth and says it was rigged so that some doors made a loud, frightening noise when you opened them, while you would have to navigate in total darkness. 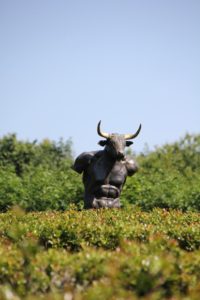 A Minotaur sculpture in a hedge maze

The other famous labyrinth from the ancient world was said to be in Crete, where the King put his terrifying son, the Minotaur. Ruins of Roman buildings often have motifs of this labyrinth over their doors, with the Minotaur at the center. However, no actual labyrinth has been round. There are connecting caves on the south side of Crete that bears similar traits to a labyrinth, but it’s in the wrong place. Some archaeologists point out the fact that the palace at Knossos has so many levels, rooms, and stairs, that it might have inspired the myth.

Labyrinths appear in other cultures, as well, including among Native Americans, the Norse, and India. In Russia by the White Sea, archaeologists discovered over 30 stone labyrinths that date back 2,000-3,000 years. No one knows why they were built. They could have been used in religious rituals or had more practical uses such as navigation for sailors. There is no written record of them, so researchers will have to continue to puzzle it out among themselves.

After Rome fell, the idea of a labyrinth persisted, though it was always as a religious motif painted on floors and walls. Many people believe these drawings represented the hard life of a Christian or how sin can trap a person. The labyrinths on the floors might have been a form of religious exercise, where someone who committed a sin would have to navigate the twisting path on their knees while praying. 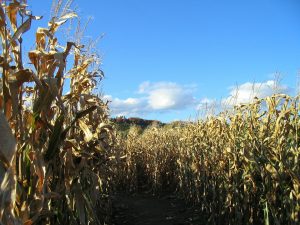 During the Middle Ages and 13th century, we finally come to the word “maze.” It comes from a Middle-English word that means “delirium” or “delusion.”  In contrast to labyrinths, mazes were created to entertain rich men and women who could afford elaborate gardens. In the 16th century, hedges would be cut into intricate shapes. These mazes might served a dual purpose – to entertain, and also to provide a way for people to meet in secret.

In America, the most famous mazes are made from corn, because it grows so abundantly here and farmers saw an opportunity. The largest corn maze ever built covered 60 acres, and some people got so lost, they called 911. Building a corn maze is a unique process that involves a lot of planning. First, the seeds have to be planted differently than for a regular harvest. They should be planted east to west, in a grid pattern, so the corn is dense and there aren’t any gaps. Once the corn is about 6-inches high, it’s time to actually design and cut out the maze. This is done using flags and string, and then the rest of corn is cleared out. An ideal size for a corn maze is about 10 acres.

Learn more about Crete, where the most famous labyrinth legend comes from, and other lost civilizations here!

The Top Five Dining Gems in the Southeast