The motorcycle market consists of three segments. Bikes with an engine displacement of 1000+ccs are powerful road warriors, eating up the pavement in thirsty gulps. Midsize bikes, let’s call them 500-700ccs, suit a certain demographic, but they are a compromise at best. Then there are scooter-type bikes and off-road trekkers. Each segment has its market, but to Gildshire there is something missing. We miss the fast and small bikes of the late 80s and early 90s. Apparently, the bikemakers at the Vins factory agree with us. Just announced and reported by Visor Down, the Vins Duecinquanta!

First off, the model name translates to “250,” and, while an important piece of information, doesn’t roll off the tongue nearly as well as does “Duecinquanta.” In fact, in Gildshire’s opinion, buyers should have to pass a pronunciation test before rolling the bike out of the showroom. That said, some bikers may see something familiar about Vins’ new baby. They may remember the Vins Powerlight introduced three years ago. That was a two-stroke 100cc V-twin sportbike built with a great deal of carbon fiber. The new 250 version is a V-twin, as well, sharing the 100cc’s carbon fiber fetish. The Duecinquanta carries the same carbon monocoque chassis design, and carbon wheels, as well as carbon Hossack-style forks. Vins is a company created by former Ferrari F1 engineers, hence the carbon fiber expertise.

Two versions are under development by Vins. There’s a track-only model with a 288cc engine, as well as a 249cc road-going version. 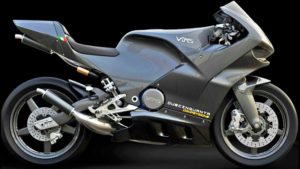 The Vins Duecinquanta track model (known as the “Competizione”) weighs less than 190 pounds, while still pounding the pavement at 80hp. Those numbers promise serious performance that would whip the britches off an old 250cc two-stroke MotoGP bike.  Vins says the Competizione is good for a top end of 149 mph.

Is there a downside? Well, the sticker price of $60,377 could be a hindrance. That’s why the road-going model is so attractive to Gildshire. Priced at a few lattes above $48,200, it isn’t a bargain. But isn’t this kind of raw fun worth it?

We’re rooting for Vins. If the tiny company can sell these bikes, other companies might look to return small/fast to the showroom. That can only be a good thing.

Cheapest Cars to Own and Drive for Five Years