In case you haven’t noticed, Yamaha Corp. has embarked on a new product blitz over the past few years. According to Car and Driver, the FZ-07, -09, and -10 Hyper Naked sport bikes lit up social media and showrooms alike. Then, the sub-liter FZ added significant value to the Yamaha line. Gildshire’s Car and Motorcycle Magazine has noticed that the company is apparently gunning for Harley-Davidson with its massive Star Venture, which is a full-dress tourer combining Japanese refinement with a huge V-twin. The latest version of its R1 race replica consistently receives kudos from the motorcycle press. Yes, indeed raves up and down the product line, hurrays and huzzahs and…now the Niken. 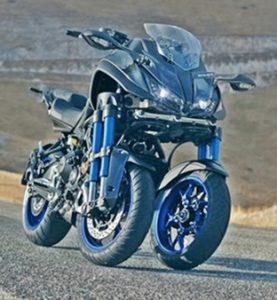 Yamaha has enough street cred to foster a wait and see of the slightly odd, and they are spending that street cred with this one. It’s…a trike?

While a third wheel up front isn’t new (Can-Ams anyone?) the third wheel on the Niken is placed differently than other three-wheelers. To find anything like the Niken we must look to Pontedera, Italy where Piaggio builds its MP3 scooters. That machine is the one the Niken most closely resembles. The Piaggio and the Yamaha differ from other three-wheelers by their use of a front-suspension setup allowing a three-wheeler to lean like a bona fide bike. That’s where they hope to snare traditional riders. All the while offering reassuring, tripod-like stability and a larger front contact patch. That’s where they hope to entice old people and those who have never biked.

The Niken isn’t the MP3, though, because it truly performs! The scooter is designed for city streets, while the Niken is a 105-horsepower 837 cc flyer. Yamaha believes this is the bike that will blow the hair back on the rider that needs a little extra.

Whether the company succeeds is a matter of question. Early comments on social media have been unfavorable, but those comments are largely from hard-core bikers. Yamaha believes there is a silent (Not majority, that would be too strong.) minority core of riders to whom the Niken would appeal.

Will we see it on the Blue Ridge Parkway, piloted by bike enthusiasts born during the Eisenhower Administration? Maybe not this week, but Yamaha hopes those folks will, at least, keep an open mind. Baby Boomers built the motorcycle industry. Maybe the day of their influence isn’t over yet.