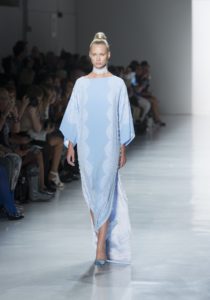 Malaysian-American Zang Toi presented his Spring 2018 collection at New York’s Fashion Week. For those who know the designer, his clientele that spans from princesses to celebrities was clear. His show began with caftans – long, loose dresses – that were decorated with chantilly lace, and pantsuits. Daywear followed, which was elegant and simple. There would sometimes be one feature that could be considered flamboyant, like 3D studs on a suit coat. These details added contrast to Toi’s signature style of sleek femininity.

For the first half of the show, just four colors were used: green, black, blue, and white. Toi wanted to embody Lake Garda, which is found in Northeastern Italy and known for its vibrant colors. All through the collection, shades of emerald green and blue could be seen.

Another common element in the collection was lace, which was sometimes printed on the fabric. Many of the models also wore lace chokers in place of jewelry. 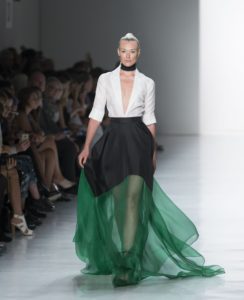 Zang Toi was born in Malaysia as the youngest of seven children. His hometown is tiny, and his father worked as a grocer. When Toi was 18, Toi traveled to New York to go the Parsons School of Design. At 28, he opened his first workshop (called an “atelier” in the fashion world). Only a year later, Anna Wintour of Vogue featured him in March’s issue. This made Toi one of the first Asian designers to earn such recognition. 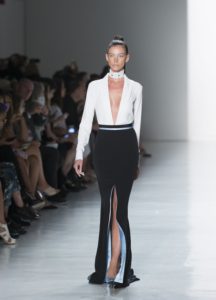 Toi’s clientele has included Melinda Gates, Eva Longoria, and Saudi princesses. He is easily recognized due to his choice of wardrobe, which includes mini kilts and tailored suits. He is not afraid to wear clothes many would consider “feminine,” saying that in the 18th century, men wore ruffles and silk stockings. Toi encourages men of today to be “more secure,” and “start with velvet.”

Toi is a man who loves good design. He even had his apartment key redesigned in silver because he didn’t like that the original brass clashed with his black-and-white decor. He doesn’t let the fame go to his head, though, and is always praising the team who helps make shows like the NYFW Spring 2018 collection possible.

What makes us decide what to wear? Read about the psychology of fashion and clothes here.