When I wore a younger man’s clothes I thought a Kawasaki Ninja was the way to ride. Bent over the bars in full-on bike racer mode, I would be the envy of all I surveyed. “There goes a man of power and import!” “Look at that bike, and hark, hear those pipes. Lemme at ‘im, now now now!” Daydreams, but potent ones. As I, and my Baby Boomer brothers and sisters got older our thoughts have changed. Now, the bent over ride posture just looks like it would hurt. Maybe a touring bike is what I need. Yeah, that’s the ticket, I need a Goldwing! It must be a Goldwing, because that was the only true tourer on the landscape. Until now, that is. BMW has Honda fully in its sights with the K 1600 Grand America. 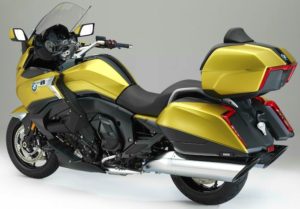 What are the specs? Well, the K 1600 Grand America’s six-cylinder engine delivers a heart-palpitating 160 horses at 7,750 rpm, and hits maximum torque of 175 ft/pounds at 5,250 rpm. Strangely, though, BMW caps the top end at 101 mph. The young racer within wonders why. BMW says it conforms to “the American way of riding.”

We think that the top-box (something touring bikes always carry) changes the aerodynamics and makes higher speeds less-achievable. (No need to insult American riders who like to go fast.)

Engine protection bars, heated grips and seats, cruise control and a high windshield all come standard. An audio system is also a stock item on the BMW K 1600 Grand America. BMW knows the gold color scheme will be eye-catching, but they also know it isn’t for everyone. The K1600 is also available in black.

Will sales of the new touring bike take off? Partly, that depends on the availability of dealerships with accommodating service departments. Honda has the customer service thing down pat, offering thousands of service departments nationwide. Those, and the Goldwing reputation for 100,000 miles of hassle-free travel, makes Honda’s grip on the touring-bike market difficult to break. Gildshire will keep an eye on the war as it heats up, because this one will be fun to watch. Perhaps, more fun even than those Ninja daydreams.