Félix Vallotton: Painter of Disquiet at the Metropolitan Museum of Art in New York City

Félix Vallotton had an evolutionary career. His large range of mediums used were emphasized in the Painter of Disquiet exhibition at the Metropolitan Museum of Art in New York City. This exhibition presents his journey from printmaker to painter in a way the truly shows his radical aesthetics and pivotal moments. From prim and proper portraits to luminous landscapes to voyeuristic interior narratives, Vallotton created curiosity and psychological tension. 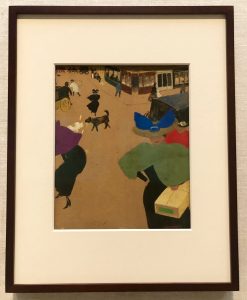 Born in Switzerland, Vallotton moved to Paris, France at 16 years old to study art seriously. Initially, he painted portraits in the traditional academic aesthetics. As he experimented more with printmaking, he became adept at xylography, the technique of using woodblocks to print images by carving into the wood. He would create a precise and detailed drawing, then simplify it. His prints were typically reductive and starkly white and black contrast. From vignettes of daily life to exposing unsavory aspects of society, Vallotton’s prints brought him much recognition. Writer and journalist Octave Uzanne described his work as “The renaissance of the woodcut.”

In 1892, he joined Les Nabis, a cult-like secret society of artists who felt that art is rooted ni the soul of the artist and the artist could act as a seer by revealing the invisible, comprised mostly of comrades from Academie Julian (where Vallotton studied). Les Nabis ascribed to specific formal tenets, rather than a similarity in content; harmonious line making being one of them. Vallotton shared some common interests with Les Nabis, but kept himself somewhat separate from the others, which earned him the nickname “The Foreign Nabi.” Vallotton became fascinated by Japanese ukiyo-e prints and produced woodcuts inspired by the flat colors and silhouetted forms seen in those prints. Even when Vallotton painted, his paintings reflected the style of his woodcuts, simplification of detail, hard edges, and flat areas of color. Street Scene in Paris, 1897 is a great example of this. With the uneasy perspective, figures receding and emerging from the view, and flat surfaces, Street Scene in Paris exemplifies Les Nabis principles and influence from Japanese prints.

Around this time, Vallotton created a ten-part series of woodcuts that is possible his most celebrated work. Intimitiés explores the subtle dynamics between romantic partners and the hypocrisies of the bourgeois lifestyle. Vallotton depicts small scenes in a voyeuristic way, as if he were seeing these clandestine encounters. These, along with other trenchant woodcuts of the 1890s, solidified Vallotton’s reputation as a top printmaker who boldly broadcasted his left-wing politics. He was truly an important figure in the development of the modern woodcut. 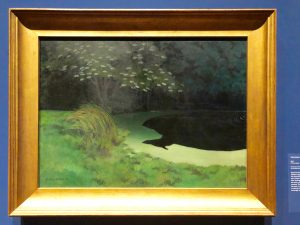 In 1899, Vallotton married Gabrielle Rodrigues-Hénriques, the widowed daughter of Alexandre Bernheim, one of the most successful art dealers in Europe. The union brought wealth to Vallotton and they, along with three children from Gabrielle’s previous marriage, would spend summers in Normandy. Vallotton was seemingly inspired by the landscapes and began painting his own, which he dubbed paysages composés, composed landscapes, for his added imaginative qualities to landscapes he saw. The Pond, 1909, is an example of a paysages composés. He sketched this pond from one he saw in Normandy, made some notes, and painted it from memory and imagination back in his studio.

By the end of his life in 1925, Vallotton had completed over 1700 paintings and about 200 prints, in addition to hundreds of drawings and several sculptures. Today, Vallotton is

recognized as a distinctive artist of his generation who bore witness to Paris’ radical aesthetical evolution in the late nineteenth and early twentieth centuries. Through that time, he developed his own singular voice. From his subversive satire to his lampooning wit, Vallotton’s inner thoughts are apparent in his artistic production. Félix Vallotton: Painter of Disquiet will be on display until January 26th, 2020.

2019’s Best Interior Design Trends From Around The World