You have to wonder how certain things came to be. Who was the first person to pry an oyster open, see what was inside, and say, “I think I’ll eat that?” Likewise, who was the first person to board a plane only to say, “Jumping out seems like an outstanding idea?” Gildshire asks a similar question about an event that took place earlier this month at Madison Square Garden. “Whoever looked at 1500 pounds of snorting bull, only to say, “I think I should ride it for eight seconds, and do it one-handed?” Well, it takes all kinds, obviously, and we at Gildshire are glad of it. Our Lev Radin was at the world’s most famous arena to witness the beginning of the PBR bull-riders’ season. He got to see quite a show, some spectacular falls, and epic athletic prowess that dwarfs the action at a professional football game.

“Who gets to compete at a place like MSG?”

The Top 35 riders from the previous season get automatic invites to the Madison Square Garden lid-lifter for the 2020 season. The show is called “Unleash the Beast.”

Singular, because it has a double meaning. Obviously, the rawest and rankest bulls in the country are trucked into New York, but in this case “beast” also means the individuals who choose to climb aboard 2/3 of a ton of angry animals. 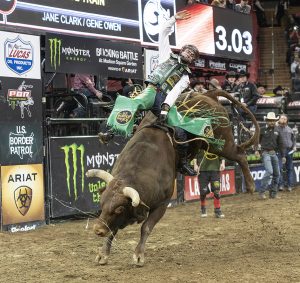 What happens at one of these things?

There are fiery events and grand pyrotechnics…

“Is that how the show ends?”

You might think so, but that’s how a show like this begins! Fireworks go off, and there is flame everywhere you look. Explosions knock you back in your seat. It’s all to get you ready for the show to come. Then comes the rider introductions, and the names of the bulls they will be riding. Or, I should say, attempt to ride. Because these animals show up with bad intentions. It really is the ultimate showdown of man versus beast.

“You asked earlier why would anyone subject themselves to this kind of thing?”

First is the timeless need to subdue something stronger than ourselves. But second is the points awarded during the Madison Square Garden event. Remember, this is only the first PBR bull-riding event. The PBR season winds throughout the country, culminating at T-Mobile Arena in Las Vegas when the 2020 PBR World Champion will receive the coveted World Championship belt buckle and a $1 million bonus.

“I get it! This is like any other sport, in that there is a season and a champion at the end.”

Now you’re on top of it! The Madison Square Garden event is important, to be sure. But it is only the first stop in a grueling season of scratches, scrapes, falls, and occasional victory over the bull. 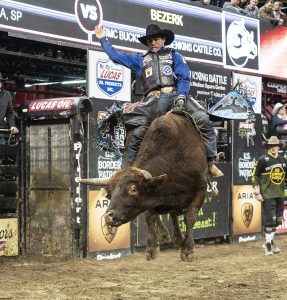 “Wow, that’s quite a gap between first and second. Who came in third? Did he get any money at all?”

Jess Lockwood won this event last year and came in third this year. He got 121.5 points and earned 20k for his efforts.

“Where would I go if I wanted to see one of these shows in person?”

The full schedule is here. Find one close to where you live and enjoy yourself. It truly is unlike any other sporting event. Madison Square Garden was only the beginning.

Félix Vallotton: Painter of Disquiet at the Metropolitan Museum of Art in New York City