Home » Our World » Happy 50th Birthday to These Memorable Cars

Okay, you caught us with our tongues firmly in our cheeks. While some of the cars that debuted in 1970 are memorable, others are lost to memory’s mists, while some barely made a memory. Today, Gildshire examines the cars that call 1970 their debut year. Some of the stylings look outdated, but at least they aren’t cookie-cutter F-150s. These were the days when carmakers made, you know, cars. So, happy 50th birthday from Gildshire to these seven cars.

Carmaker NSU developed the K70 as a rotary-engined car to rival Mazdas. However, their journey ended in bankruptcy court. Enter Volkswagen, who bought the concept for a song, and released the K70. It had a standard piston engine, but it retained NSU’s front-wheel-drive concept. It had a modest five-year run, with an average of 42,000 units per year sold.

Triumph jumped into the car market with a dizzying array of models. You could buy a front-wheel-drive 1300 or 1500. But you could also get a rear-wheel-drive Toledo, Dolomite, or 1500TC. Every last one of them was a four-door compact sedan. The Toledo was a somewhat underpowered car, but it had an upscale interior and a spacious back seat for its size.

One of the few nameplates that have survived uninterrupted for these 50 years, the Toyota Corolla E20 was then, what a Corolla is today. No nonsense people-movers, with a reputation as a car that will last and last. The American buyer could choose a 1407cc or 1588cc unit. Europeans settled for an engine that wasn’t even quite 1.2 liters.

If you remember the Vogue, count yourself as having a better than average memory. The production run of this car was a whole six months. It had a 1.7-liter engine that could manage 90 mph if it had a helpful tailwind.

The Range Rovers competition was the Ford Bronco, but the two vehicles were aimed at different buying groups. A Bronco was an off-roader that seldom saw paved highway except to go back to the ranch house after a hard day in the fields. The Range Rover was meant for a paved road, with only brief excursions off-road, and those taken very carefully. In the years since, the Range Rover has only gotten more refined, and more expensive.

Perhaps the best-looking 1970 debut of the bunch, this car came with a 66 horsepower engine that was later boosted to 76 horses. So, it was no flyer. But, why not let the people on the side of the road enjoy your car and the ladyfriend’s hair blowing in the breeze. 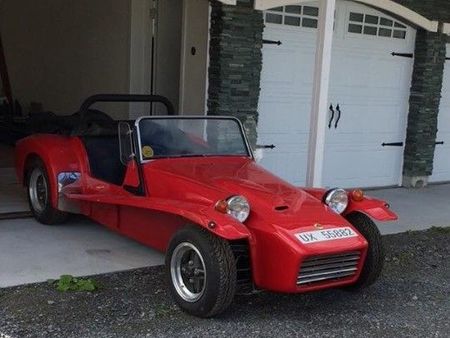 Happy 50th birthday to this car, in particular. It’s a Lotus Seven S4.

Okay, we take it back! This is the best-looking car to debut 50 years ago. In fact, few cars are remembered as fondly as this one. The Series 4 managed to be attractive and ungainly all at once. The body was fiberglass. The lightweight frame meant that the S4 was quick, even with its 1.3 or 1.6-liter Ford engines. Those who owned one can testify that it was a hoot and a half to drive, especially with the top down.

Happy 50th birthday to these cars, and a special greeting to those who would restore them to their previous glory. They were works of art in their day.