How to Know if Someone is Lying to You?

Home » Healthy Lifestyle » How to Know if Someone is Lying to You?

How can you know if someone is lying? If you look online, you will most likely find a lot of articles, videos, books, and blogs about how to read people to know when they are lying. Most of these sources will point you to non-verbal communication from eye contact, voice pitch, gaze, and other micro-expressions. It’s widely believed that non-verbal communication can be a great sign if a person is trying to deceive you or if they are telling the truth.

Are There Non-verbal Cues that Can be Reliable?

Believe it or not, there are no behavioral or body language cues that can indicate if someone is lying or not. There is a handful of behavioral cues that could be relevant if a person is telling the truth or not but they seem to be widely unreliable. Serious conclusions if someone is telling the truth or not can’t be made based solely on behavioral cues. Unfortunately, one’s nose won’t become bigger if one is lying. 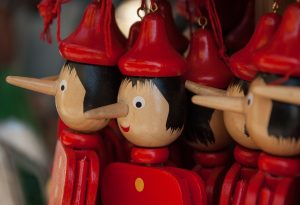 How to Know if Someone is Lying to You: How to Spot Liars?

Can You Become Trained at Detecting Lies?

There are a lot of courses offering lessons on how to become better at reading if people are telling the truth or not. The training is based on behavioral and body language cues. So, is it worth investing in a course like this? Interestingly enough, people who go through extensive training will most likely become better at detecting lies but their improvement is just slightly better than chance. So, this only proves that the behavioral cues are not reliable or scientifically proven as a way of detecting lying.

How Do We Lie?

Why can’t we detect easily when people lie? Because we are good at it. Even children learn how easy it is to look normal while telling a lie. We smile, look someone in the eye and tell a lie.

How Can We Detect Liars?

Is there a way to detect liars? There are some effective ways of detecting liars. We already established that the secret is not in body language cues. We must find something more dependable than someone scratching a nose. We must pay attention to what’s being said. Lying is way more than telling something that’s not correct and a person is aware that they are sharing false information. You need to listen to what’s being said. If you doubt that someone is telling you the truth, listen if what they are saying makes sense? Does it fit a picture of what you know?

If someone’s story doesn’t sound right, ask questions. When you ask questions, does the story change? Does a person contradict themselves when answering questions? If the answer is yes then there is a possibility that a person is not telling the truth.

Asking Questions and Understanding the Story is not Enough

Do you care enough to know the truth? Sometimes we don’t care enough. If we doubt the story, we will not act on it and we will move on with our life. However, if you care enough asking questions and understanding the truth is not enough. You need to get busy and do diligent detective work. You need to know who, what, where, and when. If an employee is saying they are hospitalized, they need to supply documentation. If your boyfriend tells you that he is at a family dinner, their family members can verify his story.

Challenge the Other Person

If you care and you doubt that the other person is not telling the truth, ask them to come clean. When you challenge a person, many will come clean instead of keeping up with a lie.

The most important part of detecting liars is finding third parties who can confirm the story or physical evidence that collaborates with what the person is saying to you.

Stop looking for useless clues such as non-verbal cues. If you want to know if someone is telling the truth, you need to do some detective work. Liars will often give themselves away but they will do that with words not necessarily with their body language.