Home » Healthy Lifestyle » Memory Lane: Restaurants That Are No More

It seems like a new restaurant pops up every 15 minutes. Some of them last just a few months. A small percentage last a few years. Once in a while, the new place will last for 5-10-15 years. Only a bare minimum last from generation to generation. Today, Gildshire goes down Memory Lane on the way back machine. These restaurants tickled our appetites for a long enough time to leave a taste memory. Let’s see which ones you remember. 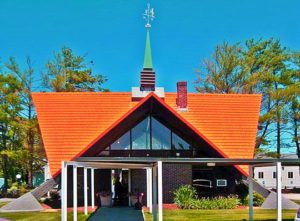 That orange roof could only mean one thing…

Howard Johnson’s: Right off the bat we lead off with one that may not have left a Memory Lane taste as much as it left a visual recollection. The iconic orange roof dotted the roadsides of America for over 50 years. HoJo usually combined a restaurant with reliably clean accommodations. That was just what the tired family needed after a day of kicks on Route 66. What was good? Howard Johnson knew how to appeal to everyone. The ice cream choices were abundant, but across the way was a bar! The hotels went first, but the restaurants slipped into the sunset. 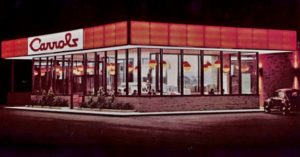 Carrols: The popular Tastee-Freez (made famous by John Mellencamp’s “Jack and Diane” as much as by its food) spun off into Carrols. So named because Carol was the TF founders’ daughter’s name. The favorite item on the Carrols menu was the Club Burger, See if this sounds familiar. It was a top bun, bottom bun, and center bun. There were two patties, special Royale sauce (sort of a French/Thousand Island mix) lettuce, cheese, pickles, and onions, on a sesame seed bun. It may appear as if McDonald’s was the competition, but it was Burger King that kept building restaurants nearby. Finally, Carrols was sold off to B.K.

D’Lites: Fast food isn’t the most nutritional lunch choice we can make. That’s true now, just as it was true in 1978. D’Lites decided to change the narrative. Boasting fiber in the buns and lean beef in the burgers, D’Lites wanted to be different. One store in Norcross, Georgia. Boom! Over 100 franchises in seven years. Bust! Bankruptcy in 1987.

Pup n’ Taco: We have to give Pup n’ Taco full credit for trying something new. It was the only fast food establishment to offer burgers, tacos, hot dogs, and pastrami sandwiches under one roof. The Southern California-based chain grew to over 100 franchises between 1958 and 1984. The chain’s demise hinged on the expensive land on which the stores resided, so they were sold to developers. 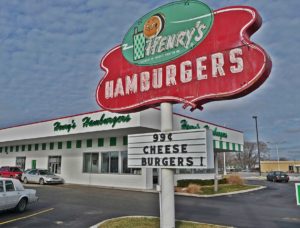 Henry’s was a popular midwestern landmark

Henry’s Hamburgers: In 1962 one hamburger joint had over 200 franchises coast to coast. McDonald’s? Nope. Henry’s Hamburgers. Henry’s was the big cheese (sorry) dominating the cheeseburger terrain during the Kennedy Administration. What happened, you ask? One unproven allegation about the possible use of horsemeat… 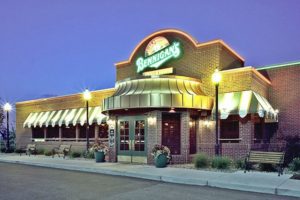 After a while, Bennigan’s parking lots were empty.

Bennigan’s: This Atlanta-based chain offered one of the nation’s first “sports bar” scenes, growing to 138 restaurants across the U.S. and more overseas. However, success was fleeting as the competition just managed to do it a little bit better. That said, sports/beer/food patrons should know that before there was Chili’s, a Buffalo Wild Wings, or a Chilis, there was Bennigan’s.

Mr. Steak: Popular in the  60s and 70’s for its beef and burger menu, Mr. Steak briefly thrived as a one of a kind establishment. However, you know what happens when someone gets too clever by half. Mr, Steak diversified into chicken, fish, and salads, until a certain Sizzler roared by and Mr. Steak never recovered. His 1987 bankruptcy filing ended a chain that once boasted over 300 franchises.

Burger Chef: “That burger and fries come with a toy, or there will be heck to pay. Better check before we get home or Billy will pitch a fit!” That sounds like a parent’s trip home from McDonald’s, but it isn’t. In 1952, Burger Chef pioneered the kid’s meal with a toy when they opened their first store in Indianapolis. Mickey Dee’s picked up the gauntlet, the fast food war was on, and at one time it appeared Burger Chef may win. Alas, people want the Big Mac they order in Pullman, Wash. to taste identical to the one they get in Coral Gables, Fla. Taste consistency, store to store, was something Burger Chef never mastered. In 1996, the Chef laid down his hat, for the last time. There was an episode of Mad Men (season seven) in which Burger Chef played a prominent role.

Did that jog your memory of a hot burger served with a steaming packet of fries? Long gone, perhaps, but never forgotten. Memory Lane is like that, you know. Yeah, Memory Lane is a hard taskmistress…and a hungry one, as well.