That Versace Dress Inspired a Generation in Fashion, and one of Google’s Content Sharing Innovations

Back in 2000, Jennifer Lopez was just starting her singing career and Google was just starting to be the biggest search engine in the world. Yet years later it turns out that a memorable fashion and pop culture moment for JLo was to be the inspiration for Google’s next innovation, the image search.

The Dress Can Change Technology

As you can imagine a lot of people searched Google back in 2000 to take another look at Jenifer Lopez in her beautiful green dress. That dress truly changed technology and made Google adjust to what their users want to see and how can they find it.

Google executive chairman Eric Schmidt wrote in a blog post for Project Syndicate: “At the time, it was the most popular search query we had ever seen, but we had no surefire way of getting users exactly what they wanted — J.Lo wearing that dress. Google Image Search was born.”

The dress became an international sensation as JLo on the arm of Sean P.Diddy Combs arrived at the Grammy’s in the Versace creation to steal the limelight. The Google Image Search is now an integral part of our technical experience and many of us cannot even remember life without it, but 20 years ago life was different, and content was not so readily available, be it visual or written content.

Google has been the pioneer company to make content available to us at the click of a button and it is fascinating to see what pop culture phenomena like That Versace Dress prompted the innovation of making visual content more readily available. And this is yet another accolade for the timeless Jennifer Lopez who looks as good today as she did 15 years ago.

A few years ago, Donatella Versace presented her Spring 2020 collection which was again inspired by the leaf-print dress that Jennifer wore once again. At the end of the show, Google image search field was shown on the screen with the comment: “Okay Google, show me the Versace jungle dress.” At that moment instead of Google image, the audience had a chance to take a look at Jennifer Lopez in that same dress that infamously dazzled the world two decades ago. Still beautiful, Jennifer Lopez walked proudly in the green dress.

It’s important to say that Google image search didn’t happen overnight. At that moment, Google was a young company with a small number of employees. The company was only two years old but it was flourishing on the market of search engines. Everyone at Google knew they have to create a Google image search option, but they simply didn’t think it’s a priority. However, their priorities significantly changed when JLo appeared in the beautiful Versace jungle dress and when people started searching Google exclusively for the image.

Even when everyone at Google realized they have to do something about Google search engine, they didn’t have anyone who would do it. So Google hired college graduate engineer Huican Zhu and partnered with Susan Wojcicki, who became CEO of YouTube but started as a product manager for Google. Two of them worked together to build a Google search engine and it was launched in July 2001. 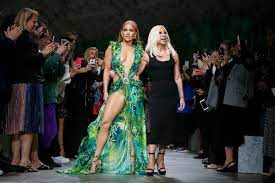 Of course, fashion is image-driven but many things are driven by what we see and how we perceived the world. Google is an image-driven platform. Most of us prefer visuals instead of written, plain text. Thanks to the internet, expensive European fashion now can be seen not only in magazines but anywhere on the internet.

Cathy Edwards, director of engineering and product for Google Images said: “It really just reflects how infinite, accessible information has really changed the world… very, very few people (were) able to really experience a fashion show, and then maybe there was some dissemination, but you had to buy a magazine, right? And you had to be the right magazine that had this dress in it. (Then) suddenly, anyone, any time, can do these queries.”

Edwards added that almost twenty years later people are still searching for “Jennifer Lopez green dress.” So there is still a sense of nostalgia when it comes to fashion and that dress that made Google change how we look at images.

Did Google know that the green dress will change them? Edwards said: “I think they knew that information was extraordinarily powerful, and that democratizing information in this way, organizing it and making it useful, making it accessible, was going to be powerful. But I think it’s hard to predict this level of impact that search and the Internet and Google has had on the world. I think everyone’s a bit surprised by that.”

Eric Schmidt also talks in his essay about Google Maps but does not provide what was the inspiration for that. Certainly, Google has kept up with every tech innovation on the market, from email to social networks, in the last 15 years. When we first signed up for Gmail many of us thought “Wow, this is different!”

Indeed, many who inspire companies like Google to create better products are just the users themselves, as Google delivers dynamic technology products to meet our needs. Also, the phenomenon of green dress changing Google shows why Google is a successful company, they listen to their users and make it easier for them to find what they are looking for.