Home » Travel & Nature » Iconic Places That Are No More

You have to be a certain age plus half a certain age to remember Burma Shave signs along the road, but there they were. Cheesy rhymes that the family chanted together as the tarmac rolled beneath the two-ply Firestones. “Don’t you fume or fuss or pout. Put a smile facing out. The world likes seeing you so glad. It’s really sad when you are mad. Burma Shave.” Or poems to that effect. Sure they were trite. Of course, they were silly. But they gave the fam something to do on the trip to Bakersfield. All of which makes Gildshire think of things and places that are no more. See if any of these ring a bell for you as Gildshire enters the way back machine. Enjoy the journey.

It was in Canada, but it was such a spectacular failure that it deserves mention here. It should have gone well, but several poor decisions made this one go south…partly because it was too far north.

There are few Canadians as renowned as the beautiful Ms. Twain. She is still the all-time best-selling female country artist with over 100,000,000 records sold. It is too bad that the Shania Twain Centre just never found its voice.

First, they chose a location eight-hours north of Toronto. In other words, a place that fairly screamed into the void, “The middle of nowhere!”

For another, for reasons totally unknown, the Board of Directors randomly partnered it with a tour through a gold mine, despite that having nothing to do with Ms. Twain or her career. Kind of like putting SALUTE TO COCONUT inside the Washington Monument.

The Shania Twain Centre failed so thoroughly that it closed, becoming a Canadian example of places that are no more. It was demolished in hopes that our Canadian friends would believe it was just a fever dream.

Fort Mill, South Carolina, was home to what was once the third-most-visited theme park in the United States. But unlike the Disney franchise, Heritage USA was a Christian-themed playground run by Jim and Tammy Faye Bakker (Messner) and their PTL Ministry.

At first, the park was a hit, attracting millions every year. Inside was a castle, a skating rink, a school of evangelism, a theater that screened religious shows, and a Main Street that was reminiscent of Disney parks.

Alas, Heritage USA crashed to the earth, quite literally. Jim Bakker was a bad actor. He was an embezzler who improperly used church funds to prop up the “lifetime agreements” he sold for condos at the park. Bakker allegedly assaulted church secretary Jessica Hahn before trying to pay her off to keep quiet. He would eventually see the inside of the gray bar hotel for his blatant misuse of church funds. In perhaps a fitting, if not Biblical end, Heritage USA officially closed when a hurricane nearly flattened it.

Why was Stuckeys famous?

At least this one was around for a minute. Stuckey’s was once a nationwide roadside diner/convenience store. Often located on a grassy strip between opposing directions of the Interstate Highway System, the store sold standard 7/11-ish items, and the diner sold hamburgers and hot dogs. It was a hit for the back seat brigade of a family headed out on a long road trip.

Are there any Stuckey’s left?

A few, but the franchise is fighting back! After the death of founder Williamson Stuckey, the family bought the franchise from Pet Foods and decided to make another run at it. Perhaps you will see one on your next long drive.

Do you remember the famous Howard Johnsons? 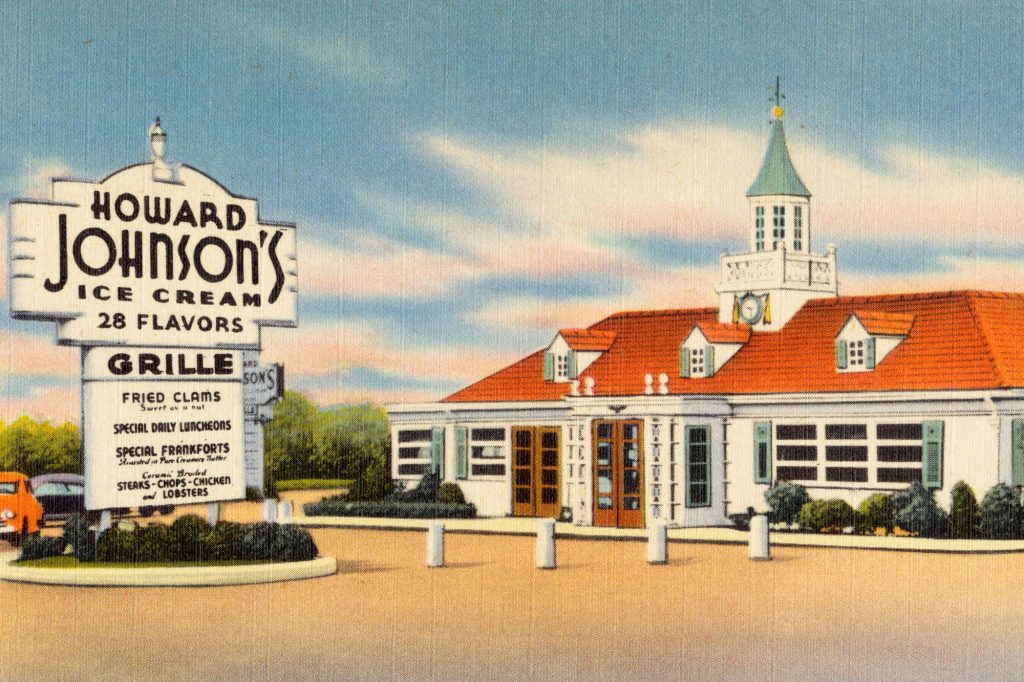 Iconic places that are no more: None more so than HoJo’s.

If you do not remember, ask a parent or grandparent because they do remember them fondly. Howard Johnsons was an iconic stop that combined a restaurant and a hotel chain.

In 1925, Howard Johnson borrowed $2,000 to buy a small corner pharmacy in Wollaston, Massachusetts. Johnson easily paid back the money lent to him when he installed a soda fountain. Indeed, while you could get a plate of fried chicken and mashed potatoes there, the real treat was the ice cream counter. The ice cream was the best! The recipe was his Mom’s, and it was flavorful because of the increased butterfat content.

In the late 1920s, Johnson opened soft drinks, hot dogs, and ice-cream concession stands along the beachfront up and down the coasts of New England. Each stand was successful. Eventually, through word of mouth alone, more Americans became familiar with the Howard Johnson Company as Howard Johnson himself did not believe in advertising through the media.

In 1954, the first HoJo motor lodge opened in Savannah, Georgia. The trademark Simple Simon and the Pieman logo was now joined by a lamplighter character. Soon, the chain became synonymous with car travel in the U.S. In its day, Howard Johnsons hardly seemed a candidate to ever be one of the places that are no more.

Why did Howard Johnsons fail and become one of the places that are no more?

I guess it only failed if one believes that a company should last forever. But, HoJo saw its reputation damaged during the Civil Rights era. Future senator and Presidential candidate Bernie Sanders marched in a protest against the chain in 1962. The chain recovered some of its clientele after becoming a voice for desegregation. In fact, more than one U.S President applauded HoJo for its desegregation stance, even in the Deep South. But the chain never fully recovered to become the ubiquitous presence it once was. Today, there is but one remaining Howard Johnson, located in Lake George, New York.

So, as you travel about the country, dreaming of a time when you no longer have to social distance, pay attention to what is around. For reasons ranging from a worldwide pandemic to bad management, some of them will someday be places that are no more. Cherish the memories.

What is the Key to Mindfulness?