In these uncertain times, anything like excellence is hard to find. In politics? Please, child. In sports, who knows, since they play in bubbles. In your brand new car? Recalls are comin’, baby. That’s why here at Gildshire, we are so pleased to bask in our special relationship with the House of Toi. It is excellence, season after season, and through and through. We got a look at the Zang Toi Spring ’21 collection through a virtual link, and color us thoroughly impressed.

Titled “Millicent Rogers: An American Beauty,” the collection from Zang Toi delivers culturally on-point as well as beautifully drawn. Why do we say that? Well, first off, a little bit about Millicent Rogers:

Better known as Millicent Rogers, she was a noted socialite, elegant and graceful fashion icon, and art collector. She was the granddaughter of Standard Oil tycoon Henry Huttleston Rogers and an heiress to the Standard Oil empire. Millicent Rogers was an early supporter and vocal enthusiast of Southwestern-style art and jewelry, introducing the creative form to wide national and international audiences to the splendor. Later in life, she became a tireless activist, being among the first notable celebrities to champion the cause of the Native Americans and their civil rights. Today, she is still given credit as a touchstone on the world’s preeminent fashion designers. As such, she is fully qualified to be a Zang Toi muse.

Early on, the Zang Toi Spring ’21 show displays a lovely white on white knee-length coat. It is set off by a southwestern belt and the most elegant earrings that reach out to the Native American tradition. Beautiful in its graceful presentation, and startlingly so in its accompaniments.

Next up, a short white coat with a mesh overlay that reaches an inch or so beyond the bottom. It is beautiful in its simplicity so that this piece leads beautifully into what follows,

Which is a picture-perfect contrast in the thematic colors of blue and white embodied by a southwestern top with a black coat. The pants start black around the hips, changing to blue halfway down the thigh. The look is creative and fun.

(Since I haven’t mentioned it yet, the model is both beautiful and with a strong resemblance to Millicent Rogers, herself. Timeless beauty knows neither era nor season.)

Perhaps Gildshire’s favorite piece was the white on white top, with slightly flared pants, and just the right amount of fringe down the top and at the sleeve setting off the starkness of the top. It was “Look 10,” but perhaps Number One in our book.

Our model donned a mask for Look #21, and the mask only seems to highlight how fetching is the outfit beneath. A white jacket with half-sleeves and a pink skirt, overlaid by the southwestern fringe that is so creatively threaded through the show. Short, but tasteful, and with the timelessness that is Zang Toi at his best and most creative.

The man can make a mask look like it belongs. That’s some rare genius. 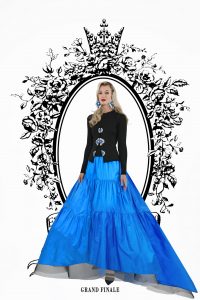 No one puts together a Grand Finale’ any better than our friend Zang Toi, and this one is no exception. Our model, Ms. Darla Mikhaylova, dons the earrings that caught our eye in the opening stanza. She accompanies them at the end with a black jacket with the by-now-familiar southwestern theme down the front. But, it is the bottom of the ensemble that puts the stamp on another brilliant Zang Toi collection. A nearly floor-length skirt in the startling blue that highlighted the show from the beginning. Why not full floor-length? Because he needed to leave room for the mesh fringe at the bottom that has captivated us throughout the fashion show.

It seems that nothing is as it has ever been in this, The Year of Our Lord Two Thousand Twenty. Oh, one thing is. The Zang Toi Spring ’21 Collection is magnificent, and we wouldn’t have expected anything less. Next year, with a throng of cheering fans? That’s our hope. But, this year’s show almost didn’t need fans, as the collection fairly applauds itself.