We continue The Greatest Road Trip Ever Taken with a trip to and through the State of South Dakota. Feted in song and dance in the movie “The One and Only, Genuine, Original Family Band” South Dakota is a state of great complexity. The flat plains of the eastern grasslands versus the rolling Black Hills. The population of the east (known as “East River” for its geography with the Missouri River) versus the lightly-populated Native and tourist west. We will talk more about the east/west divide on our trip through the state, but there is a North Dakota/South Dakota rivalry that needs to be revisited, just because it is so much fun.

Everyone believed that the Dakota Territory would be admitted to the Union in one piece. At least, that was the thought process until the free State and slave Sate folks began to pull and tug at each other. When it was determined that the distances of the Dakotas and the free/slave compromise necessitated two States each wanted to be admitted first. In what could only be described as a Solomonic moment President Harrison had the papers shuffled to obscure which one was signed first and the order went unrecorded.

South Dakota is bordered almost equally on the west by Wyoming and Montana. Wyoming has just a touch more of the western border. North Dakota provides (as one would expect) the northern border. Nebraska is to the south. Minnesota provides the vast majority of the eastern border. Iowa chimes in with a tiny piece of the southeastern terminus.

The wide-open spaces of the Great American West are given full authority in South Dakota. It’s the 17th largest state of the Union, with the fifth smallest population. The highest point in the state is atop 7,244 foot Black Elk Peak, just west of Mt. Rushmore. 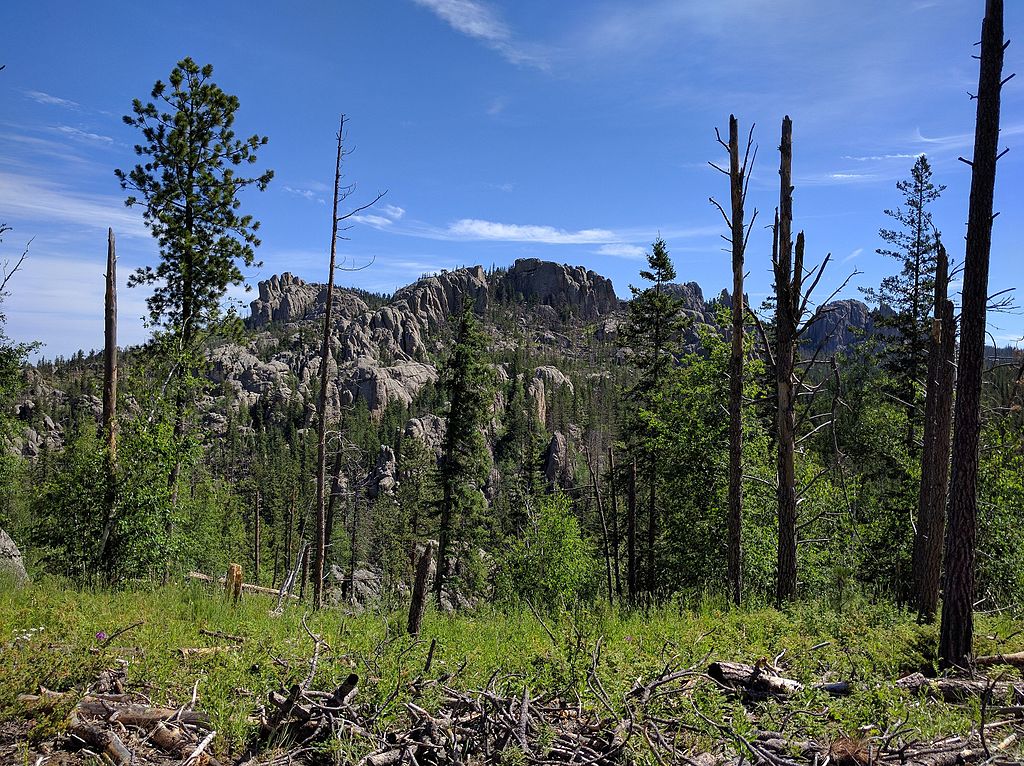 The lowest point is on the shores of Big Stone Lake on South Dakota’s shared border with Minnesota.

Sioux Falls is the only South Dakota city with a population exceeding 100,000 residents. Pierre is the State capital, but only 13,000 folks call it home. The geographic center of South Dakota is eight miles northeast of Pierre, near SD-14 toward Blunt.

Aberdeen Regional serves 20,000 people annually in the northeastern quadrant of South Dakota. Minneapolis is the most common destination.

Rapid City Regional serves almost 300,000 flyers in the western half of the State. Minneapolis and Denver share favorite destination honors.

Sioux Falls Regional greets about 350,000 passengers a year. Minneapolis is the favorite destination.


Mount Rushmore, in the Black Hills, took 14 years to construct. The designer, Gutzon Borglum, took several years to raise funds for the project to be completed.

Wild Bill Hickok was shot to death by Jack McCall near Yankton.

Belle Fourche is the geographical center of the United States of America.

Jewel Cave, on SD-16 near Custer, is the third-longest cave in the world.

Sturgis is the home of the annual Black Hills Classic Motorcycle Rally. Hotels in the Rapid City/Sturgis area begin planning for the rally the day after the previous rally leaves town.

The Pioneer Auto Museum in Murdo details more than 250 rare automobiles including the infamous Tucker and Edsel.

The first and oldest daily newspaper in either Dakota is the Yankton Daily Press & Dakotan. It has been continuously published since 1861.


Come on, you! We have another State to see. We’re going to see faces, some friendly and open, and some gargantuan and granite. I’ll explain later. Let’s go! I know the sun is almost down. I’ll explain that later too.

We’re traveling the state east to west and will cover 380 miles in the process. We will briefly discuss the differences between the two Dakotas. We will touch at greater length on what separates the cultures of the east and the west in South Dakota.

In a landlocked state known for wide open spaces and rugged plains, we start our trip off with…a waterfall. That’s how we roll.

In the city of Sioux Falls, we find Falls Park. 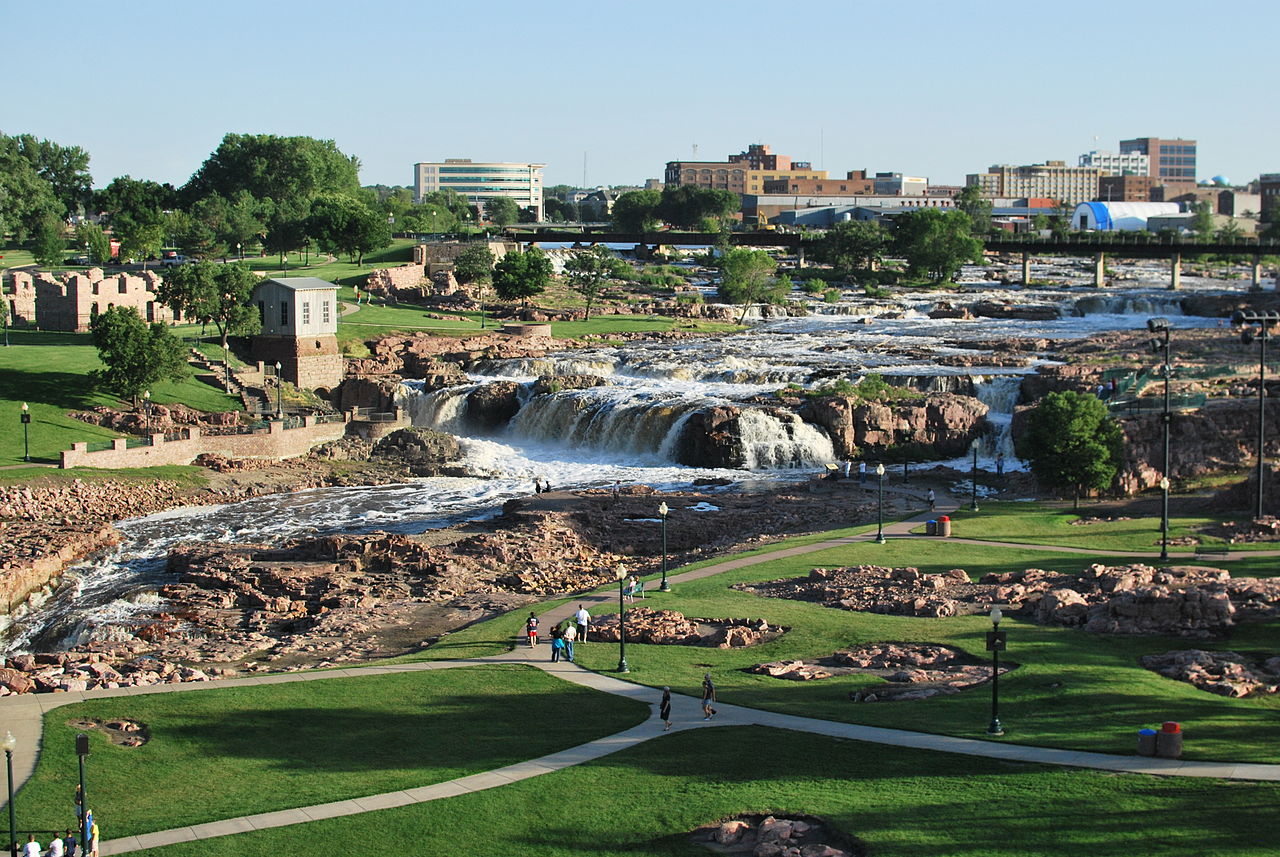 On our trip through the states, we have witnessed the power and majesty of Niagara Falls. We have seen the beauty and serenity of Koosah Falls in Central Oregon’s Cascade range. But there is something picturesque and peaceful in Falls Park. Photography must have been on the mind of the designers. The park at sunset, with the sound of the water as background music for the soothing of your soul. It’s magic in its own way.

That’s why we started this trip in the late afternoon. Sunset at Falls Park and a night at the Best Western Plus Ramkota Hotel for $93 a night sounds like just the start this trip needs.

The next morning we are on the road. Less than an hour from Sioux Falls we arrive at the famous Corn Palace in Mitchell.

First, what the Corn Palace is not. It isn’t a building made out of corn. It is a large Civic Center decorated with variations of corn. Husks, kernels, tassels, etc. There is an auditorium inside which can be turned into a basketball arena. There is a large and incredibly well-appointed children’s play area and learning center. Snacks and concessions abound in the area and the building itself is free to tour.

Next up, some truly bad stuff.  Badlands National Park is bad. The park itself is a unique National Park experience we will have on our trip to the states. The terrain is harsh and unforgiving. It looks like the moon if the moon has a bad hair day. 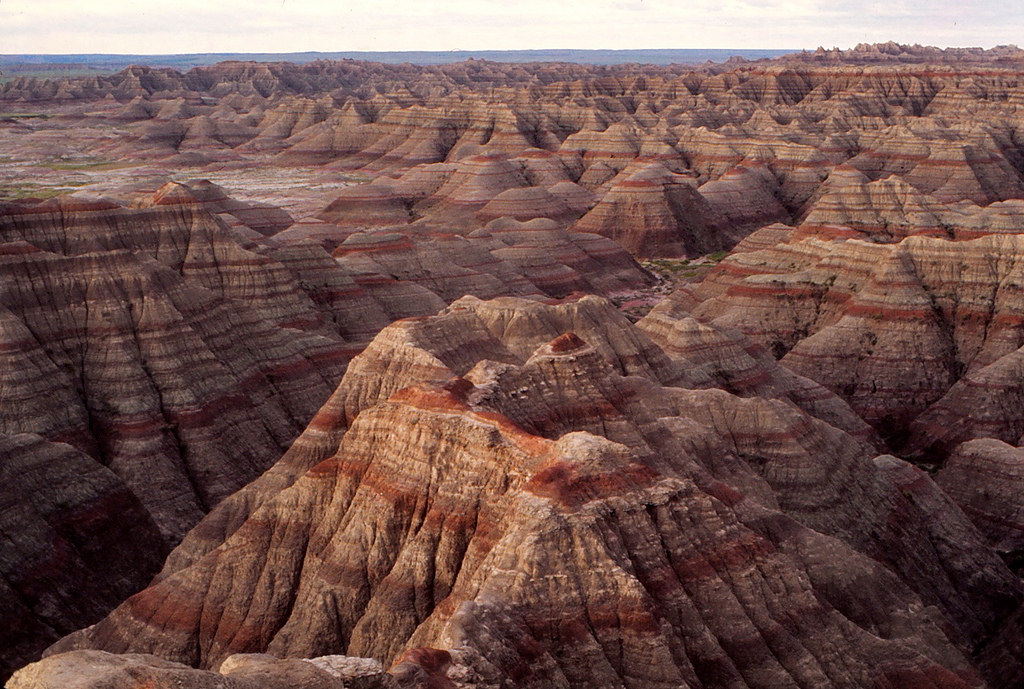 While here, we are going to hike the Door Trail. First, a short hike on a level boardwalk. Once we reach the sign that says “The Baddest of the Badlands”, we can either stay on the boardwalk or veer off and walk on some steep rocks and carefully climb on some treacherous surfaces. There are distance markers, but they are for orientation purposes. We will hike to Number Five and then have a look around.

Amazing, isn’t it? The landscape looks like nothing we have ever seen. It turns out the Badlands are bad…and that’s good.

Before we head south to Rushmore we want to take a minute to appreciate western South Dakota in general, and the Black Hills, in particular. This area is the pride of West River folks. Most of the population of the state is in the east. Out west, tradition, oneness with the land and a spirituality born from that oneness is the order of the day. There are actually greater differences in culture, lifestyle, and political thought between western and eastern South Dakotans than there is between the North and South Dakotans. Some will say the South offers people who display a greater openness to outsiders. We didn’t experience that. Everyone has been nice to us, so far. We loved North Dakota. We love South Dakota just as much.

Some will say the South offers people who display a greater openness to outsiders. We didn’t experience that. Everyone has been nice to us, so far. We loved North Dakota. We love South Dakota just as much.

Tourism is a big deal out west. Before we look inside Mt. Rushmore National Monument, let’s crunch some numbers. Each year, 2.2 million visitors come to pay their respects to the Presidential Faces. Park entrance is free. That came as a surprise.

That sets the annual revenue of Mount Rushmore National Monument at almost 76 million dollars a year. Sure, they have to pay people to sweep the park, sell concessions, and police the area. But, still…

Where does all the money go? We didn’t ask. But funding ought not to be an issue for the public school system in western South Dakota. With that kind of tax revenue, the schools should have art, music, and theater programs.

Now to the park itself. We enter through a grand archway and walk toward a display of the flags of all the countries in the world.

We consider an audio tour but decide to strike out on our own. 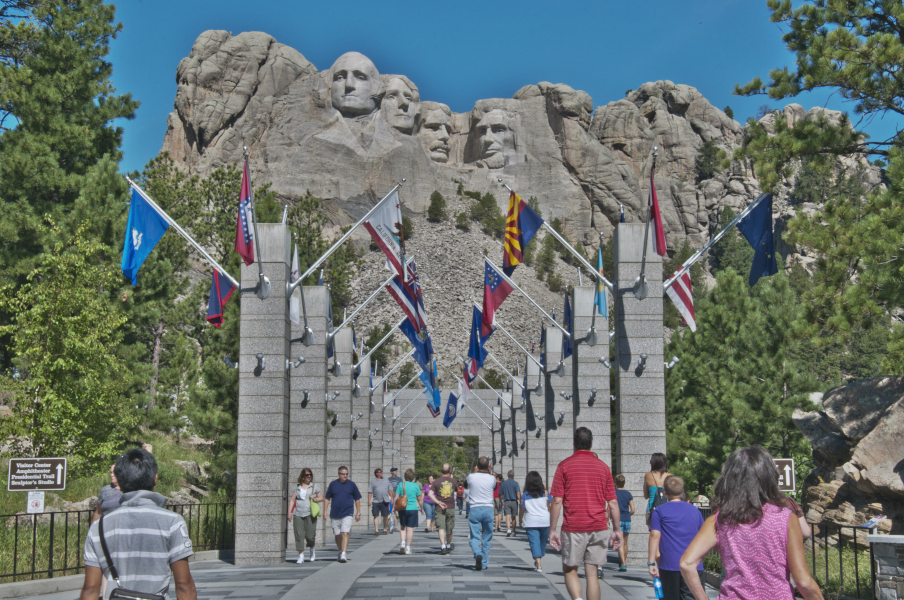 Ahead of us is the sight we came to see. From left to right, George Washington, Theodore Roosevelt, Thomas Jefferson, and Abraham Lincoln. Their faces are right there! But there is more! We can see a part of George Washington’s shirt. We can see Teddy’s eyeglasses. Look closely. Do you see part of Abe’s left hand? The sight is astounding, and we have seen it on TV countless times!!!

We look around to see people and hear languages unfamiliar to our ear. We imagine, as awestruck as we are, what it must be like for them.

If you care about American history or the American political system, Mount Rushmore should be on your Bucket List. And if you were born here and don’t care about those things, well shame on you! Everyone should want to come here at least once.

The Hall of Presidents (otherwise known as the cafe) has information on the life and times of every President from Washington to Trump. It also has the flags of all the states of the Union. Can you find California’s? Cough…bear…cough. Can you find Washington State’s? Cough…green…cough.

Fireworks light the sky above the Presidents on selected summer evenings. A light and music show bathe them every summer night. Along with thousands of other people, we enjoy the show and sway slightly to the music. The experience reminds us why we started this trip in the first place. We live in a fascinating country, rich with texture. Our strengths are the strengths of living in community. Our trials are the trials of greed and inhumanity. Can we do better? Of course, we can. We must, and together we can. Therein lies both the hope of tomorrow and the lessons of yesterday. We learn from the wisdom imparted, and the mistakes made, by the Presidents whose faces we came to see.

Mount Rushmore has been good for us. We have visited 37 states. We have 13 more states and 15 more parts of the tour to go. With the giant visages of the Presidents at our back, we head out.

The Strange Story of Matt Harvey and the New York Mets

Fat Shaming a Weighty Issue in the Theater World