So Fresh, So Clean: The Story of the Mint Plant

Home » Healthy Lifestyle » So Fresh, So Clean: The Story of the Mint Plant

Known collectively as mentha, these moisture-loving plants grow near lakes and rivers in Europe and Asia. There are a variety of mentha plants, and we call them all “mint.” The word comes from a Greek myth where a beautiful nymph named Minthe caught the eye of Hades, god of the underworld. However, Hades was already married. His wife Persephone cursed the girl so she transformed into a fragrant plant. In some versions of the myth, Minthe didn’t return Hades’ affections, so Persephone transformed her to keep her safe. This telling of the story is certainly more in line with Hades’ history, given that he kidnapped Persephone and forced her to become his wife. 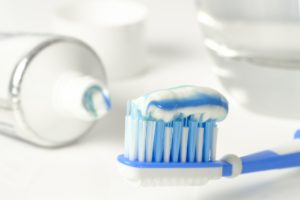 Mint-flavored toothpaste sends a cooling, cleaning sensation to your brain

Ancient cultures used mint for a variety of applications, including medicine and as a kitchen herb. The plant is hardy and grows all year-round, so it’s always been very popular. It can be used to treat stomach ache, bad breath, and nausea. It’s also a common ingredient in cosmetics and toiletries, most notably toothpaste. Why?

Mint doesn’t actually have any magic teeth-cleaning properties. The toothpaste Pepsodent came out in the early 1990’s, and people found that the mint flavor (which actually came from sassafras and not mint) sends cooling signals to your brain. That’s because of the menthol, which triggers cold-sensitive receptors in the body when it’s eaten, inhaled, or put on the skin. A cool mouth feels like a clean mouth. Toothbrushers everywhere now consider that cooling, clean flavor mandatory.

There are hundreds of types of mint because they cross-pollinate easily. In the wild, it isn’t unusual to see different types of mint growing together. The types have slightly-different flavors and uses.

Also known by its scientific name Mentha aquatica, you’ll see this mint plant a lot in gardens. It loves moist, boggy ground and grows pink flowers. Gardeners like it because of its beautiful fragrance and fast growth rate. It can be used in balms for sore muscles and in teas and salads.

Spearmint came to America from Europe and is used frequently in food. Known officially as M. spicata, the spearmint plant has bright green, sharp, and pointy leaves. Its flavor is relatively-mild. 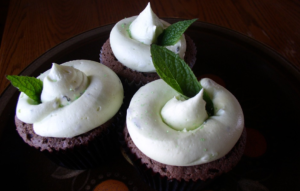 The peppermint plant (M. x piperita) is most likely a hybrid between water mint and spearmint. It has a stronger flavor, which is due to the significantly higher menthol content. This menthol content makes it the most effective mint for medicinal purposes. When you buy “mint extract,” you’re actually getting a blend of spearmint and peppermint. Pure peppermint extra is just peppermint, so it’s stronger. It’s a very popular winter and Christmastime flavor.

Also known as bergamot mint, mentha x piperita citrata, this is the mint plant that’s used in perfumes, cosmetics, and potpourri. It’s also used as a tea and flavoring for summery drinks. It has distinct purple-tinted leaves.

Recognizable by its furry, white-lined leaves, people like growing pineapple mint because deer don’t like it. It has a sweeter, fruiter flavor than other mint varieties, and is excellent in baked goods. 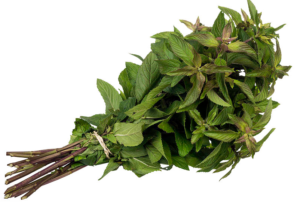 A bundle of chocolate mint

The most controversial type of mint plant, chocolate mint is bred to have brown stems and smell a little like cocoa. However, a lot of people can’t smell the chocolate, and believe it’s nothing special. For those with really trained senses of smell, they say the mint doesn’t really smell like chocolate, per say, but it has a very clean, slightly-sweet quality that’s perfect for baked goods and anything with chocolate.