Veganism and vegetarianism have become increasingly popular in recent years with many adopting unusual dietary practices for religious, health or ethical reasons. The medical community has agreed that adherents of the practice can have a balanced diet, provided they obtain nutrients found in animal products from alternate sources. In doing so, one can lower his or her likelihood of developing heart disease, cancer and other ailments in addition to maintaining a healthy weight. However, other dietary practices are being followed as well, including pescetarianism, fruitarianism and breatharianism.

Considered to be an ethical compromise, pescetarians do not eat the skin or flesh of animals unless it comes from seafood. Scientists have asserted that fish do not feel pain, or at least pain that way we understand it to be. Therefore, those who adhere to this particular dietary practice believe that at least from an ethical standpoint, following it is acceptable. They essentially follow what is referred to as a “lacto-ovo” diet which is common among populations that reside in coastal areas. The health benefits of this diet are significant, as deaths related to heart disease are almost 40% higher amongst those who consume meat. 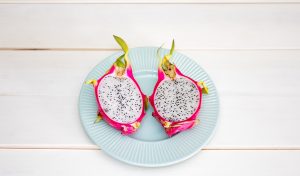 Unusual Dietary Practices: In Fruitarianism, a plate of dragon fruit is a delicious snack

A subset of dietary veganism, fruitarianism involves consuming a diet that is primarily comprised of fruit. Adherents thus obtain their daily caloric intake from all forms of fruit supplemented with seeds and nuts. Ethical considerations exist within this subset as well. Some believe that it isn’t fair to eat seeds as doing so prevents future plants from growing. Many choose to mainly eat culinary fruits or botanical ones. Conversely, a smaller group opt to only consume those that have already fallen in order to protect the plant or tree. The practice has been criticized as it results in adherents lacking vital vitamins and minerals such as zinc, iron and protein. Further, because fruits contain high levels of natural sugars, fruitarians are at risk of developing diabetes.

A highly controversial and dangerous practice, breatharianism is a form of indefinite fasting where adherents rely on the nutrients derived from the atmosphere to sustain them. They opt not to eat and even refuse to drink water, relying on sunlight and atmospheric elements alone for sustenance. While some claim to have done it successfully, all known prolonged attempts have ended with the discontinuation of the practice or death. While cases have mostly been limited to individuals in Nepal and India, some have attempted it in the United States as well.