Hello, once again movie fans, Gildshire’s movie feature is back once again to discuss the new releases. And yes, there are more than one new releases, though you wouldn’t know it from the ticket sales numbers. Avengers: Endgame dominates the news as the shiny new toy from the Marvel Cinematic Universe. It opens this weekend and has sucked the air out of the movie room for anything else. Gildshire decided two weeks ago that we needed to see it opening weekend. Tickets were 75% sold. Did I mention TWO WEEKS AGO? Unbelievable. Anyway, here are our thoughts on the big one, as well as on four other movies you may be seeing if A:E is sold out…which it probably is…already.

Avengers: Endgame, rated PG-13 for sequences of sci-fi violence and action, and some language.

Why wait? If there is a typhoon headed our way, there’s no sense in discussing the cloud formations. We have heard about movies that purport to bring things to a close, only to find a teaser at the end for a still later episode. Apparently (and I will feel betrayed if this isn’t so) Avengers: Endgame dominates the news, because it allegedly gives actual closure to the Infinity story. All signs point to a good movie for casual fans and an orgiastic delight for particular followers of the MCU. If it is what it is cracked up to be Avengers: Endgame dominates and for good reason. It stars Robert Downey Jr as Iron Man, Chris Evans as Captain America, Mark Ruffalo as Hulk, and Chris Hemsworth’s hair as Thor. Rotten Tomatoes 96, Gildshire 4.0.

Little Woods, rated R for language and some drug material. 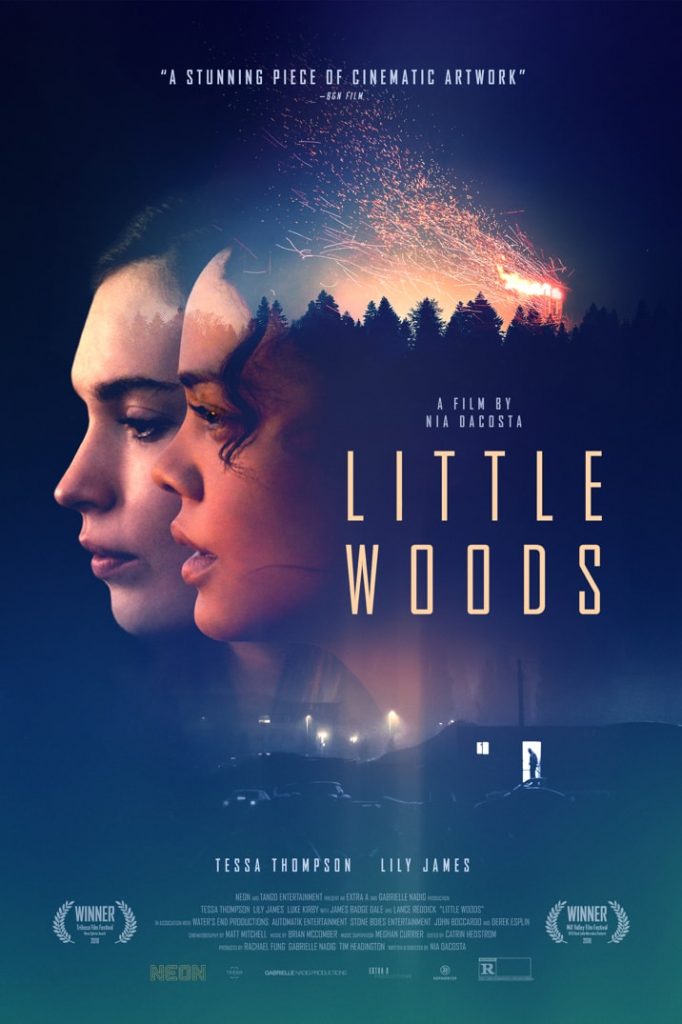 Little Woods is a powerful tale and the Gildshire Movie of the Fortnight.

In a story set in the unforgiving world of oil fracking, a woman comes to the end of her emotional rope. How she attempts to get on top of her situation makes for a compelling tale. Much about this movie is timely, and the mood is one of building tension and intrigue. There is an art-house quality to the filmmaking, and that contributes to this movie being named the Gildshire Movie of the Fortnight. It stars Tessa Thompson as Ollie, Lily James as Deb, Luke Kirby as Bill, and James Badge Dale as Ian. Rotten Tomatoes 97, Gildshire 4.4.

The White Crow rated R for some sexuality, graphic nudity, and language.

Rudolph Nureyev floated through the air as if suspended by the air currents. His dance mastery made him a treasured member of the Soviet Union. However, when Nureyev longed for freedom his nation reacted, well, as you would expect from a totalitarian state. This is that story, in movie form. It stars Oleg Ivenko as Rudolf Nureyev, Adèle Exarchopoulos as Clara Saint and Ralph Fiennes as Alexander Pushkin. Rotten Tomatoes 67, Gildshire 4.0.

Body at Brighton Rock rated R for language and some bloody images.

Alone at night, with things rustling in the bushes. A body, and a stranger that may, or may not, know something. It is a tried and true premise for the screamer audience, and this movie appears to have all of the necessary elements. The scenery is part of the action and makes for appealing cinematography. It stars Karina Fontes, Casey Adams, Emily Althaus, and Brodie Reed. Rotten Tomatoes 65, Gildshire 3.0.

Some of the best movies tell a story without the need for CGI, special effects, or manufactured screams. This is one of those movies. Carmine Street Guitars is a real place, run by a real guy. He reclaims abandoned wood and transforms it into music with his own hands. Along the way, some fairly famous people drop by and play half of a tune, or so. What a lovely example of moviemaking as it can be. It stars Rick Kelly and Cindy Hulej. Rotten Tomatoes 96, Gildshire 4.1.

That’s our list for the week. If you got your Avengers tickets in advance, enjoy the spectacle. If not, see one of the others. It’s a good week for movies, plural. Avengers: Endgame dominates, but it isn’t all there is to see.