The average life of an automobile model is about eight years. That average takes into account the old standards (think Buick LeSabre) and the one-offs ( or don’t you remember the Yugo Innocenti Koral?) According to the news this week from The Drive, one venerable model may be coming to the end of its time. The Taurus, manufactured by Ford Motor Company since 1985, is likely on the way out. Gildshire Magazines wanted to know the whys and wherefores of the sudden move.

It turns out the move has been in the works for quite some time. In fact, the Taurus’ death was slow and painful. In recent years, Ford has largely abandoned the car that saved the company, focusing instead on higher-profit trucks and SUVs.

The demise of the Taurus is a sad day for fans of the brand. It became the best-selling car in America in 1992 with sales of nearly 410,000 cars. 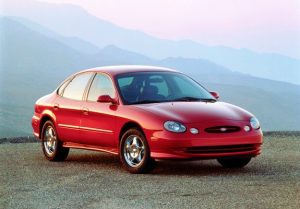 That milestone unseated the Honda Accord just as Japanese imports were starting to take hold in the U.S. The Taurus was to hold the top spot for five straight years until 1997. That’s when the Toyota Camry took over the sales lead.

In some ways, the demise of the Taurus is symptomatic of Ford’s ills as a car company. It remained largely unchanged between 2005 and 2015. Other makes and models gained on the Taurus’ technology head start, eventually passing it by. Ford made a styling change in the last two years. Car design experts applauded the changes, but it was too little too late.

Car buyers who want to walk into a Ford store to purchase an actual, you know, “car” receive this as a second blow in a short time. Last week, Ford announced the end of the Fiesta line of subcompacts. According to automotive marketers, the dwindling American appetite for sub-compacts doomed the Fiesta in America. Ford will continue to market the Fiesta in Europe, China, and in the Middle East.

With the end of the Taurus and Fiesta, the Ford lover on your block will soon be in a truck.  Or he will be in nothing at all.