Okay, so retiring to a new city sounds like a capital idea, but those tiny burgs we talked about last time are too small. Sure, clean air is healthful, but you need some of the creature comforts that come from living in a reasonably sized city. Recently, Gildshire heard about the town in America that is furthest from a Starbucks (trivia answer at the bottom.) For some of us, that’s tantamount to treason! So, for those of you who don’t want Times Square, but neither do you want Pixley, these are the best midsize cities that might meet your retirement needs.

First, though, a word about population numbers. “Midsize” means different things to different people. So, we used 100,000-ish as our guiding number. Your mileage may vary.

A town of roughly 100,000 and a college town to boot. That says quality to some people. Indeed the “Rock, Chalk, Jayhawks” is a big part of Lawrence, but it isn’t all about the school. The cost of living is right at the national average, but the average home sells for 17% below average! For active seniors, Lawrence is rated as “highly bikeable.”

Many seniors need to factor convenient health care into their retirement equation. What is any more convenient than The Mayo Clinic in your town? Perhaps in part because of the Clinic, Rochester (pictured above) is a town known for active senior living. Naturally, there are plenty of doctors per capita, but health spas and bike trails beckon the willing and able. The cost of living (where 100 is the national average) is ninety-eight. 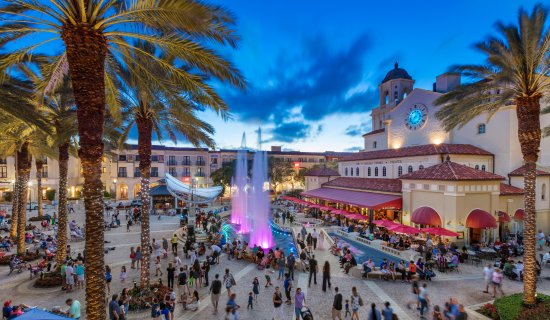 Best Midsize Cities for Your Retirement Needs: Rosemary Square in Palm Bay is a popular gathering place in the city.

“Enough with the cold weather cities! Don’t you know my bones ache in the winter?” We do now, so how about Palm Bay? There are no state income or state estate taxes in Florida to get in the way of you basking in the sun and warming those bones. The cost of living is low (very low for Florida,) and the ratio of doctors per capita is better than average. Finally, the breezes off the Atlantic make the air clean for a city this size.

Another city to take the chill out of those old bones. Clearwater’s cost of living is 5% above the national average, but the home prices there are priced a whopping 15% below the average. The economy in Clearwater is the strongest on our entire list. So, if there is part-time work in your retirement future, this could be the town where that happens for you. Clearwater is the Spring Training home of the Philadelphia Phillies and is the only town on our list to be so honored by a professional sports team.

That is our list of the best midsize cities to consider for your retirement years. We will be back in a couple of days to look at still-larger cities for your consideration. Until then…

Oops, I almost forgot. The town in the United States that is furthest from a Starbucks is Circle, Montana, tucked into the northeast corner of the state. Circle’s population is 623 souls. God love them and their hardy natures.

You are not Motivated – How to Get Things Done?