Home » Our World » Harley-Davidson is in Serious Trouble: Cans CEO

Certain constants help us to make sense of an ever-changing world. There will always be Fords and Chevys. Coke and Pepsi will be on the supermarket shelf, and one of them will be on sale. Democrats and Republicans will accuse one another of nefariousness and perfidy. Harley-Davidson will have that distinctive rumble-y exhaust note. We hold these truths to be self-evident, even if we have forgotten everything else in the Constitution. However, our foundations might be shaking, and soon. While Ford/Chevy, Coke/Pepsi, and Democrat/Republican are still in place, Harley-Davidson is in serious trouble. The uber-American bike maker, beloved by your Uncle Ricky with the long beard and the tats, isn’t selling bikes at anywhere near the pace they need to be selling them. Here is what Gildshire knows for now. Jalopnik helped with the research.

Last week Harley-Davidson quietly parted ways with CEO Matt Levatich, who had been in place there since 2015. In 4+ years, Levatich failed to make things better for a company that has seen sales slump each year of Levatich’s reign.

What did Levatich do wrong? 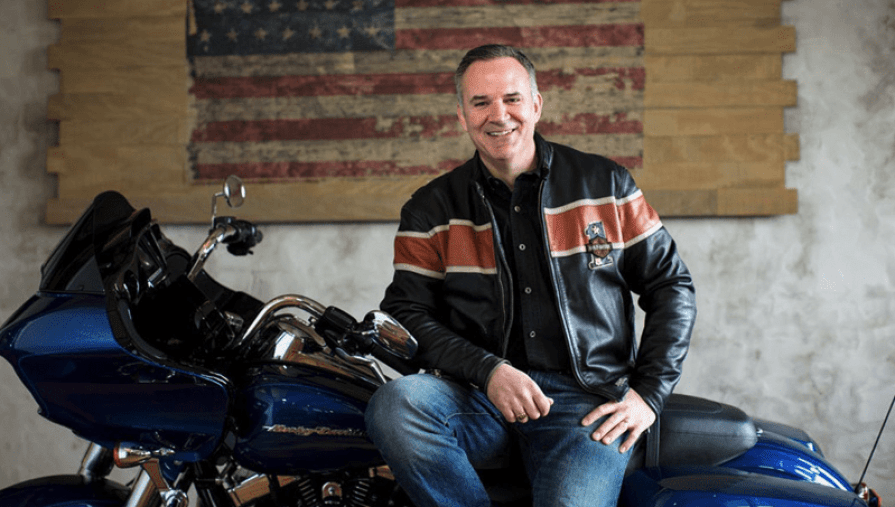 Matt Levatich is out as CEO, as Harley-Davidson is in serious trouble.

Levatich was all in on moving the Harley lineup to electrification. In fact, the new LiveWire debuted last year. It is the first of what will eventually be many electric Harleys. The LiveWire is a quality bike, but it flopped on the market. Levatich was unable to interest riders in his “New Roads” program, designed to attract younger riders. Now, H-D is desperate to find the CEO can revolutionize the company while keeping its loyal and long-time followers happy.

It appears that Harley-Davidson was not fully prepared for competition from affordable and lightweight bikes from other manufacturers. Truth told, heavy bikes are long since out of style, per David MacGregor, a Longbow Research analyst from Independence, Ohio.

“They’re finally figuring it out, but they’re three years behind the curve,” he said. “The board members and investors were just not willing to wait.”

What is the road ahead?

The new company CEO will join Harley just as it is entering more new market segments than ever in its history. Less expensive middleweight motorcycles, and small-displacement bikes for Asia, to name two. Harley is also trying everything from tweaking its logo to acquiring a kids’ e-bike company.

President Trump’s trade and tariff wars have hurt Harley. There is no disputing that. But, Harley was in trouble before Trump’s election. Now, time is running out. Harley earned $423 million last year. That’s down from $531 million two years ago. That’s a worrisome trend, since the U.S. economy was so strong. Yes, profit is profit, but Harley wants to reshape its business while still making profits.

All this to say that the next permanent Harley-Davidson CEO has his (almost surely his) work cut out for him. Gas machines are beginning to feel outdated, and electric bikes may not be here yet. These are facts that all bike makers must understand, but Harley doesn’t have a car unit to undergird it if things go south. Harley-Davidson is in serious trouble, and the path of escape isn’t clearly posted.

Packing Fashionably while Traveling Lightly: How to Pack Efficiently

Are We Headed for an Epic Market Crash?