Almost a year ago, Harley-Davidson announced that it would introduce 100 new models in the next ten years. Harley’s Iron 1200 is the newest one out of Harley’s Milwaukee headquarters. Is it a good bike? Oh, yeah. Is it transcendent? Maybe yes, and maybe no. Here’s what Gildshire knows so far. Motorcycle News helped with the research.

If the term “iron” for a Harley sounds familiar, perhaps you are familiar with the Iron 883, which is one of Harley-Davidson’s most popular bikes and for good reason. It’s cheap and looks great. The 883 also handles twisty roads reasonably well.

What it can’t do is go fast. In fact, barely 50 base horsepower and 54 ft/lbs of torque are generated.

Owners had two choices. They had to arrive late or spring for the 1200 conversion kit. Now, Harley has done the work for them. Bumping the displacement by 30% (to 1202cc to be precise) has had the effect on power that one would suspect. Fifty horses are now 66 ponies, and 54 ft/lbs of torque are now seventy-three. 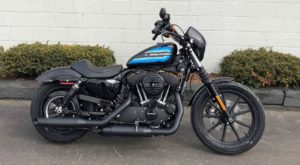 Remember the old adage about Harley? “They look good and sound great, but they don’t go around corners.” That bromide is a relic of the past and really hasn’t been accurate for a while. That’s a good thing, right?

Well, kinda, and this is our issue with Harley’s Iron 1200. They slapped a bigger motor on it but didn’t do any suspension upgrades. The brakes and suspension are identical to what’s on the Iron 883. But, as long as the rider knows he/she can get into trouble with the faster speeds, this is a good upgrade.

How does Harley’s Iron 1200 look? In a word, great! In bike design parlance, it’s “murdered out.” That means that whatever can be painted black will be, in fact, painted black. Your options for color are on the tank, but we recommend the white one.

Bottom line question. Should you buy this bike? Well, folks who want an “iron” have little reason to purchase the old 883. For just $649 extra, the Iron 1200 is budget friendly.

Can this bike turn someone who is “meh” about Harley into a devotee’? Probably not, but Harley-Davidson is going to continue to try. After all, there are still nine years left on the ten-year plan.

Is a “Glamping” Vacation in Your Future?