Ligers and Tigons and Grolars, Oh My! The Sad Reality of Hybrid Animals

In the movie “Napoleon Dynamite,” the title character’s favorite animal is a “liger,” a hybrid of a lion and a tiger. He draws pictures of it and explains how powerful the animal is. In reality, however, the liger has never been seen in the wild. The only examples are bred in captivity and have problems with obesity because they don’t get enough exercise in their small habitats and cages. Unfortunately, this is just the tip of the iceberg when it comes to hybrid animals and the sad facts of their existence. 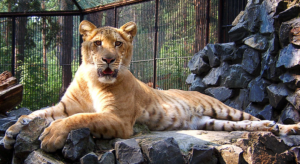 A liger in captivity

The liger (offspring of female tiger and male lion) and tigon ( offspring of a male tiger and female lion) were created just out of curiosity. The Big Cat Rescue, which cares for wild cats that have been injured or orphaned, has looked after several hybrids. Ligers and other exotic mixes are likely the result of the private trade that breeds wild cats together just for the fun of it. The Big Cat Rescue discourages hybridization, saying that it’s incredibly irresponsible and because hybrids can rarely reproduce, it doesn’t help with conservation. The largest (non-obese) liger ever, which lived at the rescue, weighed over 900 pounds.

Because of their huge size, it’s common for ligers to die young because they grow very fast, and their hearts cannot handle the size of their bodies. Health problems are rampant in other hybrids, like the zebroid, which describes any animal that’s half-zebra. Dwarfism is common, but the most frequent health issue with hybrids is that they are infertile. 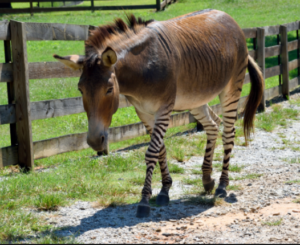 A “zonkey” – a cross between a donkey and zebra

Why exactly are humans creating hybrids? Sometimes, like with ligers, it’s just for fun. The Savannah cat hybrid is another example and represents a cross between a wild serval cat and a domestic. These are bred for their temperament, which is very friendly and almost dog-like, and distinct looks.

With other animals, like the mule – a mix between a donkey and horse – it’s for profit or convenience. The mule is probably the best-known animal hybrid, and was created so humans could have a pack animal that was stronger than a donkey but with the easier temperament of a horse. The “cama,” or a cross between a llama and camel, has a similar origin story. The mix is a way to get a llama that’s a big bigger than normal, so people can collect more wool, but not so big and unmanageable as a camel.

While hybrid animals primarily exist in captivity, there have been examples found in the wild. Grolar bears (grizzly and polar bears) were first spotted in 2006, and crosses between two species of wha le have also been reported. Why would animals mate with a different species, especially if their offspring is infertile?

One of the other triggers could be climate change. When Arctic ice melts, animals that have not encountered each before start to meet, and mating ensues. In the case with the grolar bear, the animal is more aggressive than both a polar or grizzly bear, and better adapted to a warming climate. This may seem like a clever way for threatened animals to continue on, but if they are infertile, they will eventually all die off and disappear. Experts warn that more animals are at risk for hybridization and infertility as climate change progresses.

Read about some other hybrids here.

Some hybrids seem like animals out of a fairy tale. Read here about animals that are actually mythical, but were once thought to be real.