It is as much a rite of Winter as pickpockets on Times Square on New Year’s Eve. Featured in many a movie (and an important plot point in “Miracle on 34th Street) the Macy’s Thanksgiving Day Parade veritably shouts “NEW YORK CITY!” Now, for the 94th consecutive year, the Macy’s Thanksgiving Day Parade dazzles and delights one more time. As is the case with all major NYC happenings, our Lev Radin is on the scene.

For those who can’t make it in person, more than 44 million people worldwide will watch the parade on television. It was first televised locally in New York City in 1939 as an experimental broadcast on NBC’s W2XBS. [15] No television stations broadcast the parade in 1940 or 1941, but when the parade returned in 1945 after the wartime suspension, local broadcasts also resumed. 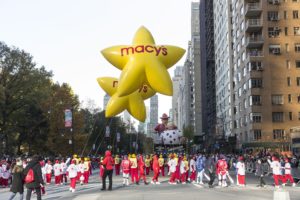 The Macy’s Parade says all you need to know about The Big Apple, but did you know it is a transplant? Originally a Newark, New Jersey event, sponsored by Bamberger’s Department Store, the parade was moved to town by the Macy family in 1927. Since then, it is the nation’s unofficial kickoff to the Christmas season.

This year’s lineup of acts, stars, and ostentatiously large balloons is among the best in the parade’s history. Among the featured musical performers is the ageless Smokey Robinson. He will be joined by entertainment acts  Flo Rida, The GooGoo Dolls and Wyclef Jean, along with 98 Degrees. Together they will help to celebrate music, just as surely as they celebrate the Holiday season.

Disney Channel fans will be happy to see Olivia Holt in the Parade lineup. Her debut EP, “Olivia”, was released last year on Hollywood Records.

The Macy’s Thanksgiving Day Parade always draws its share of personalities, in addition to musicians. This year, Jimmy Fallon, and  Padma Lakshmi & Tom Colicchio of Top Chef will be along the way. They will be aboard the Tom Turkey float. 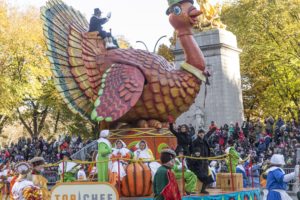 Leslie Odom Jr. (of “Hamilton” fame) will perform for the millions gathered along the street. He will be joining the cast of Sesame Street for this event.

Expect to see, and hear, the cast of the musical “SpongeBob SquarePants – The Broadway Musical.” That will be a treat for young and old. The cast of “Anastasia” will perform, as well. 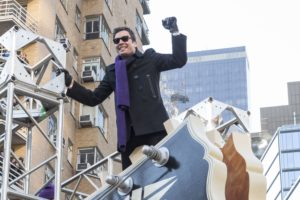 Who else will be there? A host of assorted celebrities and luminaries from the world of politics and entertainment opened their calendar to the event. Expect to see the reigning Miss America, Cara Mund as she continues her year owning that august honor.

That’s a prestigious crop of celebs, to be sure. However, a Macy’s Thanksgiving Day Parade with celebrities and personalities only, is a group of people walking down the street. How much fun would that be? Not much! The Macy’s Thanksgiving Day Parade is about floats and balloons, more than it is about famous folks. What can we expect to see in the way of balloons and floats?

Traditional floats and balloons, such as Charlie Brown, Hello Kitty, Pikachu (from Pokemon’), Ronald McDonald, and The Pillsbury Doughboy will make appearances, as per usual. New favorites include the Red Mighty Morphin’ Power Ranger, Diary of a Wimpy Kid, and the Aflac Duck. We dare you not to quack his name when you see that one. 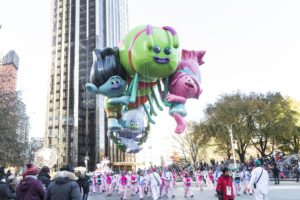 One float-itious favorite makes a return this time around. “Harold, The Baseball Player” will be on hand. He was in The Miracle on 34th Street,” and this is the 70th birthday of that film classic.

Speaking of which, You Know Who will make his official 2017 debut as the climactic moment to the Macy’s Thanksgiving Day Parade. Whether or not he has to prove himself before a judge remains to be seen,

This year’s march, beginning Thursday at 9 a.m, will once again attract 3.5 million spectators to the streets of Manhattan. It is a slice of Americana that signals the start of a day filled with family, food, and football. Moreover, it rings the starting bell for a season of joy and merriment. Enjoy the parade, and all it entails. Your friends at Gildshire will be all over it. After all, it will be hours until that bird makes his appearance. Can you say, “Yummy?” Like the late, great Mr. Rogers, we knew you could. Enjoy your day!