Home » Our World » The Current War: Edison vs. Tesla

The rivalry between Thomas Edison and Nikola Tesla has become legendary. Featured in films like The Prestige and shows like “Drunk History,” the story goes that these two brilliant, but very different men spent their lives at each other’s throats. What put them at odds? Is the legend even true?

Tesla worked for Edison for a while, but they went their separate ways after a supposed bet gone wrong. Tesla claimed he could improve Edison’s dynamo prototypes (a dynamo is part of a steam engine) and Edison said if he succeeded, he would pay Tesla $50,000. Tesla threw himself into the task, and after several months, he had indeed increased their efficiency. When he tried to get his reward, Edison said the bet was a joke, and that instead he would give Tesla a raise. Furious, Tesla quit. 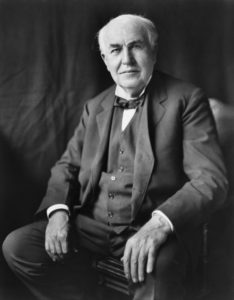 In 1878, Edison decided to get into the electrical-lighting business. In 1882, the Edison Illuminating Company opened in New York City, with a 110-volt direct current system capable of powering an incandescent lamp. However, just four years later, George Westinghouse opened his own electric company, and installed the first AC power system in New York. The difference between these two currents? DC flows in one direction, while AC changes direction. AC also has a higher voltage.

AC systems spread into Edison’s DC territories, and money got tight for Edison. People began trying to convince him to switch.

For all its success, AC systems started gaining a bad reputation. The high voltages scared people, and stories about accidental electrocution spread. A dentist – Alfred P. Southwick – ran with the idea, and conducted cruel electrocution experiments on dogs. He ended up creating the electric chair. This association certainly didn’t help AC, and in 1888, the media took Westinghouse to task. That same year, Tesla emerged again, as Westinghouse bought his induction motor patent for integration into the AC system.

The war heats up

One engineer – Harold P. Brown – took it upon himself to fight against AC systems. He conducted disturbing experiments where he used 750-volts of AC to kill animals, showing the dangers of AC. Was Brown’s anti-AC stance provoked by Edison? While Brown insisted for years that there wasn’t collusion, letters published in 1889 reveal payments from the Edison Company to Brown.

Ultimately, Westinghouse’s AC current won. Tesla got to build a power plant at Niagara Falls for powering New York City. However, AC is far from perfect, and most plug-in devices like your computer or phone charger actually convert AC into DC. This wastes a lot of energy, so scientists are still trying to figure out to better integrate the two currents. 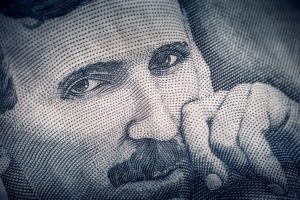 Tesla, as depicted on a bank note

What about Edison and Tesla?

Working up to the end, Edison died at age 84 in 1931. Tesla, still bitter, wrote a negative option of the man in the New York Times, saying that “his method was inefficient in the extreme,” and that Edison “lived in utter disregard of the most elementary rules of hygiene.” Tesla would spend the last years of his life working on a “death ray,” which he said would be a defensive weapon capable of protecting a country’s borders from ground or air attack. In 1843, he died at age 86.

Was the feud real?

Clearly, Edison and Tesla didn’t like each other. However, the mythic proportion of their rivalry might be just that: a myth. Historians aren’t convinced of Tesla’s story of that bet between the men when Tesla worked for Edison. It would be equal to 53 years of work from Tesla, and the initial capital of the entire Edison company. Other sources say the true source of Tesla’s anger was Edison’s refusal to raise his salary from $18 a week to $25.

Tesla’s first biography might be the originator of the feud. In Prodigal Genius: The Life of Nikola Tesla, author O’Neill describes the Edison Medal gala where Tesla received the prize, which he was reluctant to even accept as it bore Edison’s name. Just when Tesla should have given his speech, he disappeared, and one of his friends found him standing in the street, covered with pigeons. He then went back inside and gave a long, improved speech. O’Neill claims no records of that speech exist, but that’s simply categorically false. In that speech, Tesla actually praised Edison. It seems things were a bit more complicated than we’ve been led to believe.

Is Edison history’s most prolific inventor? He actually is not.