It’s hard to believe that we are 25% of the way through the NFL season (give or take a bye week), but that is the case. The month that started with 32 confident fan bases is over. While some are still confident, others look like they were hit with the business end of a snow shovel. Wherever you are on the spectrum of team confidence, Gildshire is here with NFL quarterly grades. Continue reading with caution because your team may be named after a fish. 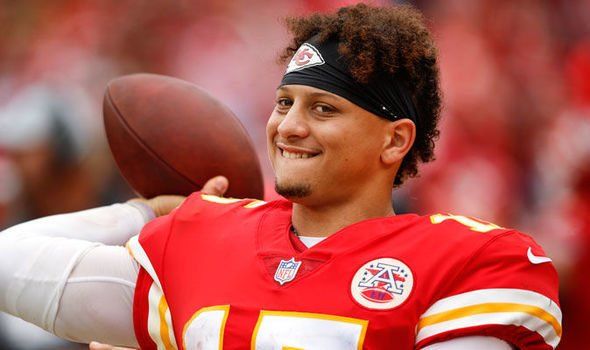 Kansas City Chiefs’ QB Patrick Mahomes is a major reason his team gets an “A” on the NFL quarterly report card.

Most experts believe that the AFC Championship Game will be a rematch between the Chiefs and the Patriots. The early season returns have done nothing to dissuade the pundits from that opinion. Last week, the Chiefs proved they can win without a top-notch effort from quarterback Patrick Mahomes (We hope his new relationship with Aaron Rodgers agent on the State Farm ads hasn’t hurt his performance.) Meanwhile, New Orleans has weathered the loss of quarterback Drew Brees. They’re playing strong defense and getting good outings from backup Teddy Bridgwater. Dallas lost to the Saints, but quarterback Dak Prescott is getting better by the week. The New England Patriots stubbornly remain the Patriots, in spite of the rest of the league’s desire that they just go away! Congrats, “A” people. You get a hot lunch and a full recess.

A bell curve is thickest in the middle. (Just like Gildshire on Thanksgiving afternoon.) That’s why ten teams are receiving so-so report cards this grading period. They arrived at this point from different directions. The Eagles, Ravens, Browns, and Vikings come from lofty expectations, but they need help with consistency. The Giants are, actually, overachieving as they were left for dead after two games. Oakland is gangbusters on offense, but can’t stop anyone. That is as predicted. The L.A. Chargers had salary holdouts that held the team back. Carolina is breathing a bit easier since their starting quarterback went down. The Colts bravely talk about life after Andrew Luck, but they aren’t fooling anyone. Tennessee never drops below average, but never exceeds the mid-mark for long either. “C” people get peanut butter and grape jelly sandwiches and a half recess.

The Arizona Cardinals came within an eyelash of making this group, but a strong second-half against Detroit gained them a tie. Also, no one expected much of the Cardinals, anyway. So, on to the failing grades.

Jets quarterback Sam Darnold came down with mononucleosis, and his team has been just dreadful since. The kissing disease excuse won’t fly, though. A team can lose a quarterback to illness or injury and be not dreadful. The Cincinnati Bengals have never looked feebler than they did on Monday Night Football against Pittsburgh. Way to step up under the bright lights, fellas. Washington has three quarterbacks! That means they don’t have one quarterback. Finally, the Miami Dolphins are the worst of the worst. “F” people get gruel and no recess at all.

There you have it. The NFL Quarterly grades for the first month of the season. There’s time or the Cs to become As, but the Fs???? You guys will have to prove it to me.