Home » Our World » The Origins of Black Friday

On the Friday after Thanksgiving, millions of shoppers descend on stores to get the best deals. It can be a dangerous time, with surging crowds desperate to beat out their neighbors for savings, but for many, Black Friday is an annual tradition where they get up early to meet family and friends at their favorite store. When did this tradition start? Where did it get its name?

The Macy’s Day Parade first promoted a big shopping spree after Thanksgiving in 1924. It took decades before the term “Black Friday” caught on. Despite the lack of a catchy name, shopping around Thanksgiving became such a big deal for the economy that President Roosevelt even tried changing the holiday’s date. He moved it up by a week in 1939, but announced it in late October, when most Americans had already made plans. The new Thanksgiving was given a mocking name – Franksgiving. By 1941, there had been no change to sales, so Congress passed a law that made Thanksgiving the fourth Thursday in November.

In the 1950’s, Philadelphia saw a surge of tourists arriving for the Army-Navy football game. The police force struggled with the crowds, calling the dreaded day “Black Friday.” Stores also began using the name, because lines were long and customers pushy and chaotic. Realizing that “ 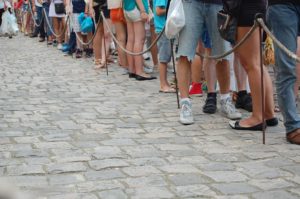 Long lines are part of the deal on Black Friday

Black Friday” didn’t sound appealing, they tried re-branding it as “Big Friday” in 1961, but it never caught on. By 1985, “Black Friday” was a nationwide phenomenon.

In the 1970’s and ‘80’s, the name “Black Friday” got another makeover. Businesses started saying that they sold so much that a business once “in the red” could go “in the black.” While this might have been the case for a few lucky stores, it was just another marketing ploy to try and avoid any negativity around the name.

There’s a myth about “Black Friday” that’s gotten traction in recent years. According to a Facebook meme and other equally-reliable sources, the term originated in the 1800’s, when slave traders offered deals to plantation owners the day after Thanksgiving. Historians have thoroughly debunked this theory; Black Friday is much more recent and not connected to slavery at all.

These days, “Black Friday” is a huge selling day, but it’s getting smaller. The early hours and often violent crowds have turned shoppers off. In 2015, 102 million people showed up to stores, compared to the 147 million in 2012. Companies have begun taking advantage of the popularity of online shopping, and launched Cyber Monday. You can find deep discounts, especially on electronics, on sites like Amazon the Monday after Thanksgiving. 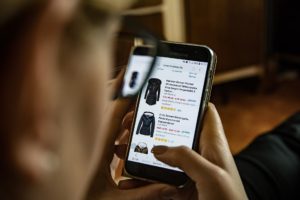 If you go shopping on Black Friday, stay safe. Tragedies on Black Friday have included a stampede that killed a security guard, car accidents due to the early hour, shootings, and stabbings.

What are some items you shouldn’t get on Black Friday? Fitness equipment, tools, and jewelry don’t see many sales. Gift cards are also cheaper in December, while anything holiday related plummets in price after the New Year. In terms of what you should buy, toys usually see major discounts. You can also usually find deals on makeup, plane tickets, cameras, and other tech. Be sure to check out Amazon, too, for the Black Friday Deals of the Day, which is going on now.

What will Black Friday be like this year? Check out Gildshire’s guide for 2017.