Home » Style & Creativity » Making Marvels: Science and Splendor at the Courts of Europe at the Metropolitan Museum of Art

Have you ever wondered what it was like centuries ago before the technology we live with today? How did clocks work? How did people navigate their travels? How did anyone do math without a calculator? So many things we have now we take for granted. The royal families in Europe collected useful (and not so useful) objects that they could display and possess technological advances. The Metropolitan Museum of Art in New York City has approximately 170 objects from their own collection and from lenders around the world on display in their exhibition, Making Marvels: Science and Splendor at the Courts of Europe, now until March 1st, 2020.

Following the famous adage, “knowledge is power,” the rulers of the early modern era in Europe (1550 and 1750) aimed to amass a vast collection of decorative arts and technological advancements. This was considered an expression of power, status, practical wisdom, self-mastery, and moral virtue; all aspects that went into the concept of what makes a successful leader. 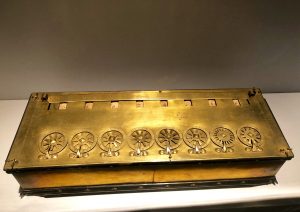 Silver became the precious metal most directly linked with princely power as gold became more rare. Silver pieces would be shown off at banquets and signaled territorial wealth and power. However, because silver was used as currency, the pieces were always in threat of being melted down and used as coins. Prince Paul Esterházy I’s Baroque ensemble is an exquisite set of pieces made during the early stages of silver as furniture, as well as some of the last few survivors of this expensive period.

Kunstkammer is a German word for a cabinet of curiosities, a space for amazement, scientific investigation, and magnificence. Pieces in these collections were often curated to demonstrate a family’s divine right to rule and typically became heirlooms of great importance. Interestingly enough, sensory engagement became an accepted form of scientific exploration and knowledge. It was joined with theoretical information from texts to create a “new science” that promised new discoveries for European rulers. Taking natural materials and adding to them in order to transform them into works of art, sometimes even useful pieces, was an esteemed process by scholars and princes alike. Nautilus cups are a prime example; these two originated in Germany, made by the nephew of Wenzel Jamnitzer, a famed goldsmith. The shells were mounted onto figures of a Triton and a Nereid, crowned by Neptune riding a snail thus playing on the origin of the nautilus shell. 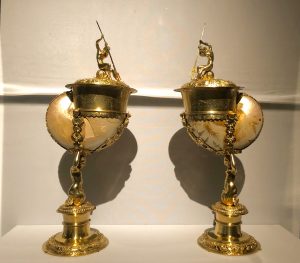 Of course, jewels are a type of marvel that often made their way into the Kunstkammer. Gemstones have been associated with heavenly bodies, magic powers, and healing properties for eons, therefore displaying them in the Kunstkammer linked the ruler to the natural world and emphasized their wealth. In the eighteenth century, innovations were made in gem-cutting techniques and allowed for stones to have their inner brilliance released. The “Dresden Green” diamond is the largest natural green diamond in the world and the only one of its kind. It has been used in many royal jewels, but was finally incorporated into a hat ornament along with over four hundred white diamonds and has been untouched since 1769. It is a true marvel and the picture does not do it justice!

Geometry and astronomy became important aspects of the “new science” that may researchers sought to understand. It became increasingly important for rulers to gain understanding (or at least be able to display the appearance of an understanding) of mathematics and the solar system. Devices to do calculations and measure movements of planets were created and the fields of math and science grew.

Making Marvels presented a myriad of pieces that explored the complexities of early modern European rulers and the contexts in which they were displayed. From furniture to transformed materials, to compasses, the exhibition emphasizes the incredible advances made by artisans and researchers in the early modern era.