The Major League Baseball year consists of four distinct seasons. Spring Training, which lasts from late February to the end of March. The regular season, lasting from the beginning of April (maybe the very tail end of March) to early-October. Finally, the post-season and World Series takes about two weeks to complete. Those are the bat and ball seasons. The free-agent season, underway now, is when millionaire ballplayers become mega-millionaire ballplayers by changing teams or threatening to do so. Gildshire looks at some of the MLB free agents that are most sought-after, with some thoughts on their eventual destinations.

Cole made no bones about his status as a member of the Astros when he appeared with a “Scott Boras” hat instead of a World Champion Houston Astros hat. As in immediately after the World Series. Boras is Gerritt Cole’s agent. Though that could be construed as tone-deaf, there is nothing discordant about Cole’s on-field numbers. Several teams with a need for starting pitching (and who doesn’t need a starter of this caliber) are making a run at Cole. Reportedly, the Yankees are pushing hard, but our prediction: The Los Angeles Angels. 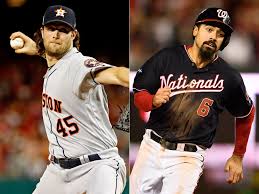 The World Champion Nats had a lot of players who played out of their minds this year, but none more than third baseman Anthony Rendon. Extra base hits, including 34 home runs, leaped from Rendon’s bat and into the Capitol City night. In this, his contract year, Rendon went from good player to elite and will cash in on the fortunate timing. The Angels, Braves, and Phillies will come calling, but our prediction: The Washington Nationals.

Since arriving on the scene as a heralded rookie until this season, Strasburg has been an enigma. When healthy, the hard-throwing right-hander has been good and even elite. But his stints on the disabled list were vexing to the Nationals. Now, though, he is a World Series MVP who posted a 3.32 ERA over 209 regular-season innings. Not only that, but his post-season heroics were the stuff of legend. In 36.1 playoff and World Series innings, Strasburg had a 1.98 ERA, including a gutsy 8.1 inning effort in the win-or-go-home Game Six against the Astros in Houston. This is the Strasburg the Nats dreamed of when they selected him first overall ten years ago. It is a coin flip whether Cole or Strasburg is the top pitcher of this free-agent class, but whoever gets either of them will be an instant contender. The same teams in consideration for Cole will be in line for Strasburg or vice versa, depending on who goes off the market first. But, our prediction: The Washington Nationals.

Though his team hasn’t been in the playoffs for several years, baseball fans know the post-season legend that is Madison Bumgarner. In over 100 innings of post-season ball, “MadBum” has a 2.11 ERA in the post-season to back up his three rings. Though he hasn’t quite maintained the strikeout rate of his earlier campaigns, a couple of injuries could account for that. Bumgarner is only 30 years old and has plenty left in the tank. The team that acquires him will get a gritty grinder who never lets up on hitters…or umpires. Our prediction: The Atlanta Braves.

Those are some of the top MLB free agents from the 2019 class. Where will they go when the dust settles? We’ll be watching along with you.