Most of us probably think of the holiday season as a time of fun and joy, but in many traditions, there’s a dark side, too. Krampus, a half-goat, half demon creature from Central European folk tales, has enjoyed somewhat of a revival in peoples’ imagination, but there are many more scary Christmas monsters out there.

On the Feast of Epiphany, if a child is good, a mysterious woman known as Frau Perchta will leave a silver coin in their shoe. If a child has been bad, however, she will actually tear out their organs, replacing them with straw and pebbles. Coal doesn’t sound that bad, right? She also isn’t a fan of unkempt houses. Frau Perchta is either young and beautiful, clothed in white, or hideous and old. As a witch/goddess, she’s quite powerful. In Alpine villages, she’s the star of the show at festivals where party-goers wear masks and dance around fires to ward off scary Christmas monsters.

For Icelandic kids, you want to watch out for a giantess named Grýla. When winter comes, she emerges from her cave, hungry for misbehaving children. If she finds any, they’ll end up cooked into a stew. Grýla is also the mother of thirteen Yule Lads, troll-like creatures who visit kids the thirteen nights before Christmas. Their giant cat, known as the Jólakötturinn, also enjoys eating children who don’t do their chores. While she existed before, Grýla the giantess didn’t become connected to Christmas until the 17th century. Because she was so terrifying to children, the government actually gave her a makeover, so instead of eating bad kids, she and her sons just leave a rotten potato.

Scary Christmas monsters frequently have dark backstories, and Le Pere Fouettard may have the darkest. It goes back to the 12th century. An innkeeper (or butcher) attacks three boys, taking their money. To cover up the crime, the murderer and his wife cook their victims. When St. Nicholas learns of this horrific event, he resurrects the boys. The innkeeper repents, but must now travel with St. Nicholas for the rest of time. He still gets to indulge in his violent tendencies, however, as he carries a whip to flog bad kids. His name actually translates to “Father Whipper.” 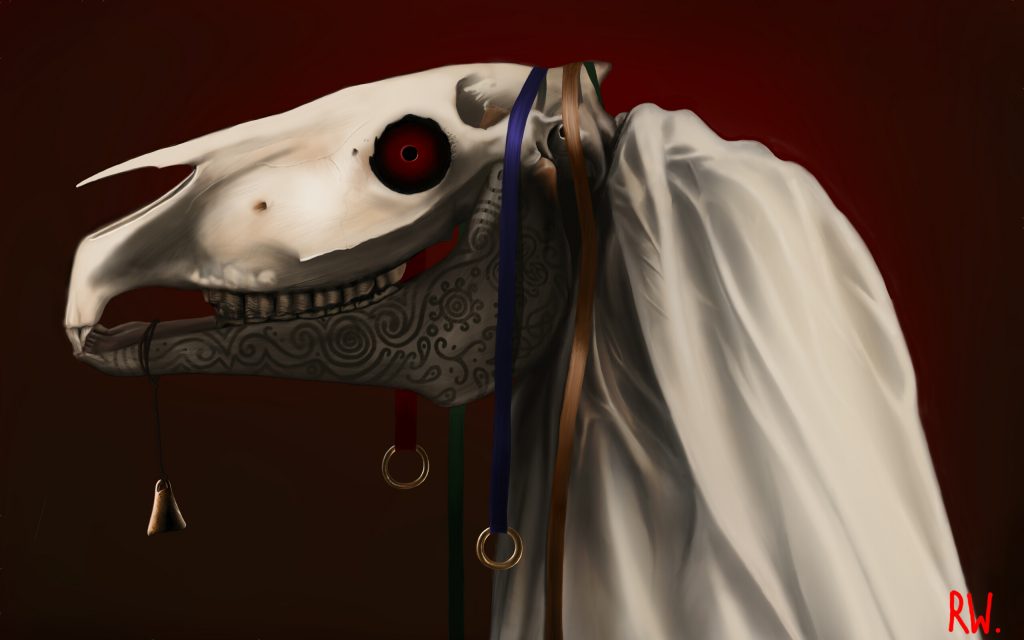 The Mari Lwyd may look like a creature from a folk horror movie, but it’s actually part of the wassailing tradition in Wales. Waissaling is sort of like caroling in that you go around to your neighbors houses. While waissaling, you earn an invitation inside for treats and waissal (a spiced mulled ale drink) by engaging in a rhyming duel. Oftentimes, a person draped in white will arrive carrying a horse skull on a stick. That’s the Mari Lwyd. The custom was first recorded around 1800, but it’s most likely much older.

This Italian witch looks scary, but she’s one of the few scary Christmas monsters who doesn’t punish kids. She rewards good ones. According to legend, La Befana met the Three Wise Men on their trip to Bethlehem, but turned down their invitation to join them. However, she soon realized her mistake, but couldn’t catch up. She eventually lay under a tree to rest, when a branch transformed into a flying broomstick, so she could look for the baby Jesus. During Epiphany celebrations in Italy, La Befana will show up to give treats and gifts.

While not a monster, Zwarte Piet is certainly a polarizing and controversial Christmas character. Here’s why.

Combating Holiday Stress: Getting through the Most Wonderful Time of the Year