What will the City of the Future be Like?

Home » Style & Creativity » What will the City of the Future be Like?

Have you ever watched the cartoon of the late 80s? Maybe the Flintstones and the Jetsons? The Flintstones was set in the Stone Age, while the Jetsons seemed to be set in a future that was pulled out of someone’s imagination. Children may have believed that the Stone Age really was filled with Dino type dogs and rocks carved into televisions, but it may have been a bit harder to believe that the cars of the future could fly or that tubes transported people to a different part of an office. Surprisingly, this type of future may not be as farfetched of a concept as imagined thirty years ago.

Cities of the Future: Sky or Water?

The city of the future often has two prospective options, that of in the sky or under the water. Both may be viable options at some time, but what would each look like in a world that is currently lived on the ground. Consider looking out the window of an office that begins 183 stories up from the ground. Perhaps your flying car, a prototype of which has already been created, has been docked in the midair garage housed under your current workplace. What if you looked out that window and just across the busy intersection was a herd of cattle grazing in a sky-farm. These high rises, urban sky-farms could be a reality sooner than most would think. A bit outside the business district a city of pods that house many families could raise high into the skyline. Is this the picture of the future 10 years for now? 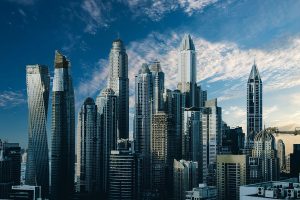 What will the City of the Future be Like?

Perhaps the school of thought that cities will move underwater is more realistic. The technology needed to make small scale underwater, bunker-like housing is already in existence, but more advanced technology would be needed for larger scale, city-like dwellings. Underwater habitats would offer life support monitoring of air composition, temperature, and humidity. In the future satellites may be capable of relaying important information to the world above as well as receiving information as needed. Solar panels on the water surface or something used to harness the power of waves could be an alternate energy source for these pod cities that were connected by a series of tubes. At present, energy sources are the biggest hurdle to such underwater civilizations.

So which option sounds best? Some would prefer the view from up high with fresh air abundant, but would severe weather be a problem? Some may prefer the fishy view from below the water’s surface where coral abounds. Would sunlight be available? We will always wonder what the future holds until it arrives and that is what makes dreams possible.