Hello again, movie buffs and film-ophiles. This is your humble movie preview chronicler, back with the best ideas for how to spend the weekend to come. The day after Halloween is a tricky one for the movie industry, as concession sales are at an all-year low. It makes for some good buys since your little brother ate all of his and all of yours. #whatabrat. Anyway, Gildshire knows why you’re here. You’ve seen Sarah Conner kicking butt and taking names for two months on the ad for the blow-stuff-up blockbuster of the season. Will Terminator: Dark Fate take home the big prize this week? Are we afraid we will be blown up and walked away from in slow motion if it doesn’t? No, and…a little bit. Let’s see what the week has to offer.

The problem with a franchise such as this is that there have been so many. Now, the filmmakers have to resort to time travel. That technique leaves logic holes like the craters of the moon. Beyond that, this isn’t the worst in the franchise, but it isn’t the freshest either. It stars Linda Hamilton, Arnold Schwarzenegger, Mackenzie Davis, and Natalia Reyes. Rotten Tomatoes 70, Gildshire 3.0.

“Motherless Brooklyn,” rated R for language throughout including some sexual references, brief drug use, and violence.

Lissenherebub! Gangster movies can go one of two directions, you got me? They can be great character studies, interspersed with senseless violence. Or bub, they can be senselessly violent, with interspersed caricatures and mawkish dialogue. Motherless Brooklyn is the first kind, led by Edward Norton’s compelling performance. It co-stars Bruce Willis, Gugu Mbatha-Raw, and Bobby Cannavale. Rotten Tomatoes 66, Gildshire 4.3.

Everyone knows about Harriet Tubman, but almost no one knows Harriet Tubman. We can debate whether the American school system is to blame for that shortfall. This movie attempts to tell the vast tale that is this heroine. It is a good-to-great movie, even if it fails to do the impossible. It stars Cynthia Erivo as Harriet Tubman, Leslie Odom Jr
as William Still, Janelle Monáe as Marie Buchanon, and Joe Alwyn as Gideon Brodess. Rotten Tomatoes 74, Gildshire 4.5.

“The Irishman,” rated R for pervasive language and violence throughout. 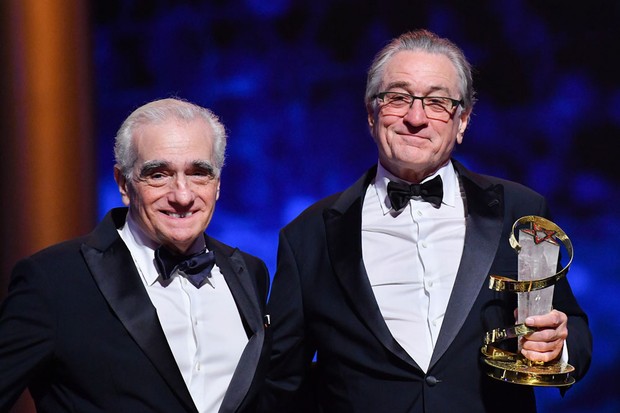 Scorcese and DeNiro join forces for a great movie. Or will Terminator: Dark Fate win the day?

An epic film is one that travels a long distance through plot and era, visiting sometimes familiar themes, but adding nuance. Or, they are long and tedious, leaving you wishing you had chosen another movie. “The Irishman” is the first kind, so it earns the Gildshire Movie of the Fortnight Award in a close contest. “The Irishman” covers decades, and revisits painful times in this country’s history. But that’s why we need movies such as this one. Is it explicitly true? No, but it isn’t explicitly false, either. Let’s just say it earns its length with quality work. It stars Robert De Niro as Frank Sheeran, Al Pacino as Jimmy Hoffa, Joe Pesci as Russell Bufalino, and Jesse Plemons as Chuckie O’Brien. Rotten Tomatoes 98, Gildshire 4.6.

There are a lot of quality movies coming out this weekend. Will Terminator: Dark Fate be the lead story in Monday’s box office news? Yes, but that’s why Gildshire entertainment magazine readers are crucial! You go to the great movies when the box office bombshells are less than what you deserve. Together we support great films and give the back of our hand to cinematic schlock. It’s a noble cause, and we’re glad you are in it with us. Back in two weeks, so enjoy the film offerings from your local Coming Attractions theater.