Home » Our World » When A Body Is “Incorrupt”

In 1830, the Virgin Mary visited a woman named Catherine Laboure. Catherine was a member of a convent and had visions before, but this one was special. She witnessed Mary standing in an oval frame, her hands emitting rays of lights, and surrounded by twelve stars. When Catherine emerged from her vision, she created medallions with the image, and thousands of Catholics began wearing them. Catherine died in 1876. When she was exhumed for her beatification (a step towards sainthood), people discovered her body “in a perfect state of preservation” with flexible limbs. Her body was “incorrupt.” 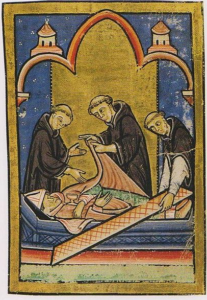 What does this mean? In Roman Catholic and Eastern Orthodox beliefs, those close to God sometimes experience signs of being blessed after their death. Instead of going through the normal process of decay, their bodies are preserved. This doesn’t mean they are as fresh as the living, and occasionally only certain body parts are preserved. Sometimes the preservation is just delayed, and eventually the body decomposes. One saint, Francesca Romana, was declared incorrupt a few months after she died in 1440, but when her tomb was reopened two hundred years later, she had decayed to a skeleton.

What’s the science behind incorruptibility? The Church had pretty strict rules, especially when incorruptibility was required for sainthood. Physicians, church reps, and non-church members would all inspect the corpse, so everything was above board. Mummies, embalmed bodies, and other corpses that were in conditions that encouraged preservation were not legit. Other bodies around the potential saint decomposed normally, and it also helped their case if the saint had died violently or from a disease that would encourage rapid decay. 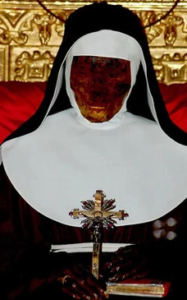 The incorrupt Catherine of Bologna

There are two examples of incorrupt bodies that science has trouble explaining. The first belongs to Catherine of Bologna, a woman who died in 1463. She was buried without a casket, so she should have decayed pretty quickly. However, after visitors to the area where she buried reported a floral smell, she was dug up. This sweet smell, known as the “odor of sanctity,” is a common association with incorruptibles. Catherine’s body displayed no signs of decomposition. The story goes that when a nun pulled off a piece of loose skin from Catherine’s foot, fresh blood flowed. Her body has been displayed since 1500, and is still well-preserved.

The other saint – Bernadette – died at only age 35 in 1879. She was exhumed in 1909, and found to be incorrupt. After being returned to her grave and then dug up in 1919, she was removed a third time in 1923 and dissected. Doctors found her organs still soft. She can be found at a convent in France. If you visit her, you’ll be shocked at how smooth and clear her skin is, but that’s because she’s been coated in wax. This is a common step for corpse caretakers, who want the saint to look as lifelike as possible. Some even wear metal masks to protect against candle smoke or receive spa-like skin treatments. Skeptics consider these deceiving tactics.

In the 20th century, the Catholic Church decided incorruptibility was no longer required for sainthood, most likely because not all incorrupt bodies belong to good Catholics. Dashi-Dorzho Itigilov is one of the best-known. The Buddhist monk died in 1927, and was buried in the lotus position inside a pine box. In 1955 and 1973, monks examined his body, and found it had not decayed. In 2002,  scientists examined the body more closely.  The official statement: the body resembled a person who had died “only 36 hours ago.”

Bodies found in bogs are so well-preserved, you can still see their fingernails and hair.

High On Power: The CIA and MKUltra