Sports never stop. Sure, individual games end and single seasons conclude, but sports are about what happens afterward. Champions are crowned, and parades down Main Street take place. But no one cares (outside of Toronto and the Greater new England-area). Because the rest of the country says, “what’s next?” That’s what makes tournaments such as the U.S. Open Juniors so intriguing. As the tennis stars who we love get older and slower, we cheer them for their accomplishments. All the while, we find our minds drifting to what’s next. Here are some names to whet your appetite for the future on international tennis. Gildshire is already excited for tomorrow, even as we celebrate today.

Alexa Noel is the third-ranked Junior on the girls’ side and could become a better doubles player than singles’ competitor. At any rate, she has compiled an excellent season. She hit the top of the podium in Milan and scored several runner-up finishes in both Grade A and Grade One events.

Last year, Ms. Noel was a top seed on the Juniors side of things but was a surprise upset in the second round. This year, she advanced one step further before being ousted in the third round, 6-2, 6-1 by Indonesian star Priska Madelyn Nugroho.

An interesting side note on Alexa Noel, she lists one of her hobbies as her “ability to remember song lyrics after hearing a song just one time.” Gildshire could use her around the house when the radio is on.

Mr. Forejtek already began his professional career, but wants to finish strong on the Juniors circuit. Coming off a strong win at Milan, he won the U.S. Open Juniors with a 6-7, 6-0, 6-2 win over American Emilio Nava. It was a particularly gratifying win for Forejtec bowed out in the second round of last year’s event. For now, it appears that the future of men’s tennis may run through this talented young man. 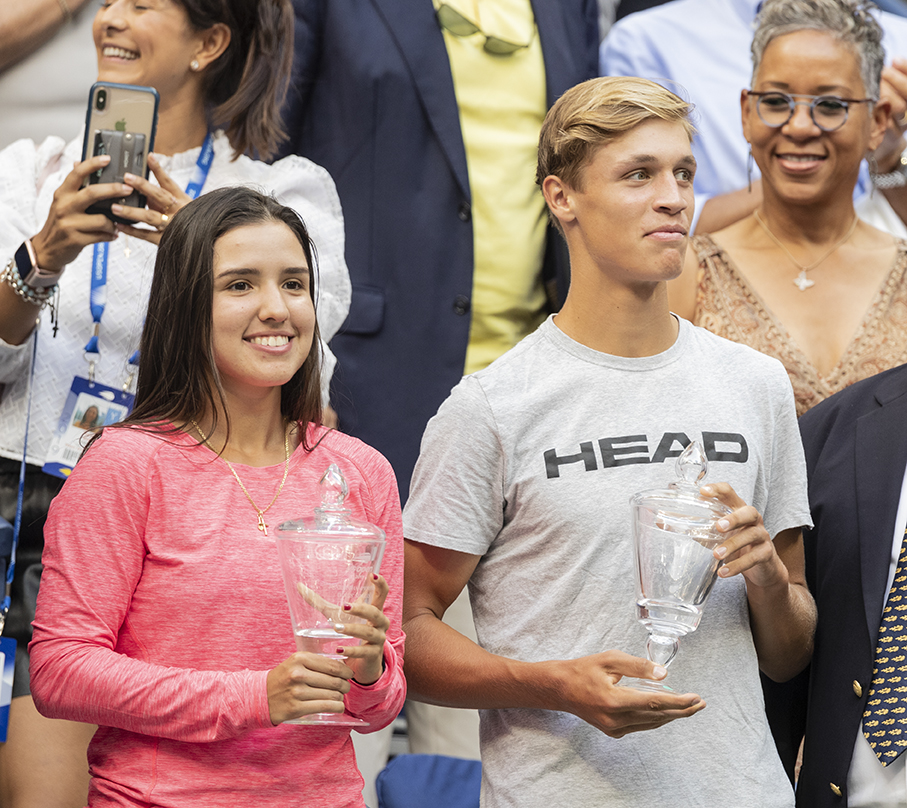 The winner of the girls’ draw at the 2019 U.S. Open Junior tournament completed her junior career with this event. That would be Maria Camila Osorio Serrano, and the adult tour had better take notice! Ms. Serrano’s final match score of 6-1, 6-0 over American Alexandra Yepifanova was just as dominating as the numbers appear. Pushed to three sets only once in her run through the draw, she outclassed, outworked, and outplayed all comers on her way to the title. Known for her relentless work ethic, Maria Camila Osorio Serrano is one to watch and one to root for on her climb up the ladder.

The U.S. Open Juniors crowd was on its feet last week when Lavallen pulled off one of the biggest upsets of this tournament, impressively dethroning top-ranked Shintaro Mochizuki 4-6, 7-6, 6-2. Mochizuki was expected to make a deep run at the Open. Instead, Lavallen took his place. In the third round, Lavallen found his Waterloo 6-4, 6-4 to France’s Valentin Royer. But, his Lavallen’s second-round upset win gave the crowd a glimpse of the potential lurking inside this young Argentinian.

To make it further in this tournament would have been a Cinderella run. It was not to be, but the U.S. Open Juniors made the tennis world sit up and take note of Alejo Lorenzo Lingua Lavallen.

It was a great tournament from start to finish, and Gildshire was excited to be a part of it. Watch this space next year for more coverage of the U.S. Open Juniors.

Meghan Markle: The Duchess Bridging the Gaps Between Us