Thanksgiving might be over, but pumpkin pie will be present on many Christmas dinner tables this year. The history of this dessert in Europe goes back to the 1500s, but the pumpkin we know came from Central America and is much older. Cultivation had been occurring since at least 5,000 B.C.

Pumpkins were one of the first food crops in both South and North America. They were one of the Three Sisters of agriculture, alongside beans and corn. When growing corn, Native Americans would wait until it had sprouted a few inches, and then they would plant beans and pumpkins. The cornstalk helped protect the beans, while the beans added nitrogen to the soil. The vines of the pumpkin retained moisture for all three plants.

Pumpkin seeds were very important, especially to the Tohono O’Odham tribe in North America. They would grind the seeds into flour and mix it with cornmeal for bread. For other tribes, pumpkin seeds were said to give people energy and endurance. Considering that pumpkin seeds are a good source of healthy fat, fiber, and protein and also contain energy-boosting minerals like zinc, the Native Americans were right. In addition to the seeds and flesh, they ate the blossoms and dried the shells for bowls and storage.

When explorers to “the New World” discovered the pumpkin, they weren’t shocked. Europe had similar gourds and squash, but not like the ones in the Americas, which were sweeter and dryer. Explorers brought seeds back to Europe, and England began growing them in large numbers.  They were called “pompions” back then, after the French “pompon.”

When pilgrims started coming to North America, they were no doubt glad to find the pumpkin growing abundantly there. They were easy to grow since they needed very little care, and were larger than the European variety. They made all kinds of dishes with pumpkin, including pumpkin ale. In 1621, during a harvest festival with the local Wampanoag tribe, a version of a pumpkin dessert – most likely a custard – was served. 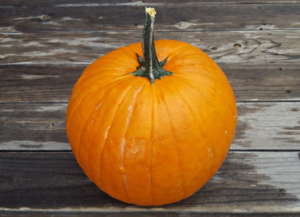 What might that have looked like? It wouldn’t have been like the pie we know today. Recipes from this era instruct a cook to boil the pumpkin whole in milk, often with spices like sugar and rosemary and then wrap it in pastry. In New England, a simple recipe has you just hollow out the pumpkin and fill it with sweetened milk. You cook it right in a fire. There was no crust, as the settlers didn’t have butter or wheat to make it. In a 1670 cookbook from England, Hannah Woolley has you fill a pan with layers of pumpkin and sliced apple, and add herbs.

By the time the 18th-century rolled around, pumpkin pie was present on every table around Thanksgiving, which then was limited to New England. After the Civil War, pumpkin pie actually became a bit political, since many in the South saw it as the North impressing their culture on them. Resistors would make sweet potato pie instead, or add traditionally-Southern ingredients like bourbon and pecans to their pumpkin desserts. When Thanksgiving went national in 1863, pumpkin pie did, too.

Canada and North America remain the only countries where pumpkin pie is eaten regularly, though pumpkins now grow all over the world. Today, farmers breed-specific “pumpkin pie” pumpkins which are sweeter and smaller than ones intended for decoration.

When did pumpkin spice enter the picture? Find out here.

Do You Have Imposter Syndrome? What Can You Do?