The Toronto Raptors’ championship parade barely ended, but basketball people are on The Next Big Thing. The 2019 NBA Draft takes place Thursday, June 20 from the Barclay Center in Brooklyn, and the event will be telecast live on ESPN. What should we expect with the top few picks? What may happen further down the line? Are there any valuable players that might be taken in the second round? All this and more in Gildshire’s guide to the 2019 NBA Draft.

Some of the top picks will be the usual suspects, well-known by anyone who watched the March Madness college basketball tournament. Man-child Zion Williamson will go first to the Pelicans who just traded Anthony Davis to the Lakers for their entire future. Williamson is 6’7″, 285 pounds, handles the ball like a point guard and blew out a Nike in a game this Spring. While some people question if his body can take the torque his game lays on it, the Pelicans would be silly to pass up this much talent with the Number One pick. 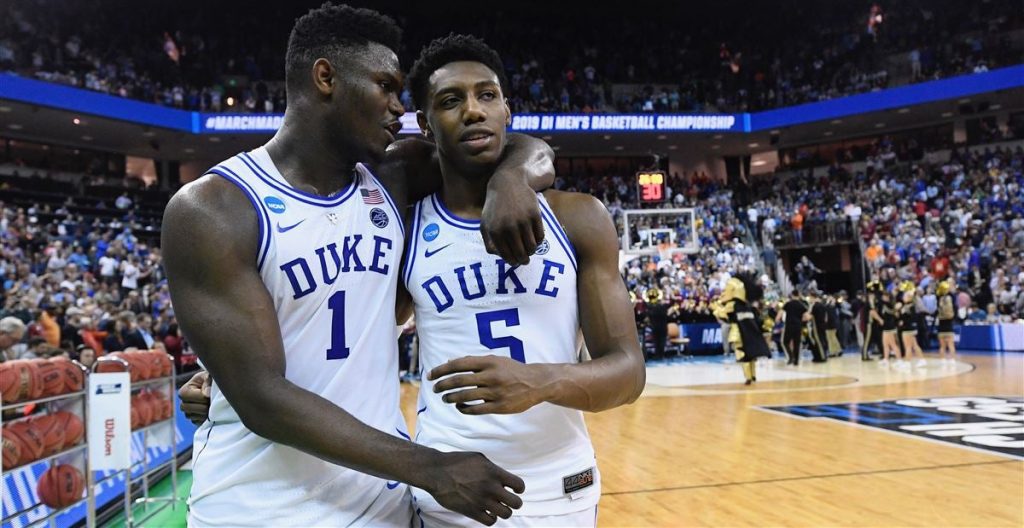 l to r, Zion Williamson and R.J. Barrett. Two of the Top Three picks in the 2019 NBA Draft.

Ja Morant and Williamson’s Duke teammate R. J Barrett will go 2-3 to the Grizzlies and the Knicks. Most people assume Morant to the Griz and Barrett to the Knicks, but that could change. There are even those who suggest that Barrett is the better NBA prospect, but those voices are few. Morant made a name for himself this March by carrying his Murray State Racers to a deeper run in the tournament than most expected.

Deeper in Round One?

Predicting the picks deeper in the first round can be tricky, but let’s give it a go, shall we? We’re going to predict the Phoenix Suns will select Daris Garland from Vanderbilt. The Commodores had an awful season, and their Head Coach lost his job because of it. But, Garland made a name for himself as a hot-shooting point guard.

Centers are a dying breed, but the Atlanta Hawks may buck the trend and select 6’11” Jaxson Hayes out of Texas. At 220 pounds, Hayes can stand to be fattened up a bit, and the Hawks training staff will look to do just that.

Speaking of centers, one intriguing player is 7’2″ Bol Bol, out of the University of Oregon. He was off to a great start this last year before an injury sidelined him before the conference season could get underway. He’s the son of former NBA center Manute Bol.

Between the first and second round of the NBA Draft, there is a huge difference in perceived talent. In fact, no sport cherishes first-rounders and discounts second rounders like the National Basketball Association and its fans. That said, a half dozen members of the freshly minted World Champions were second-rounders or undrafted free agents. The Golden State Warriors’ Draymond Green was a second-round selection out of Michigan State. So, there are diamonds in that rough. You just have to know how to mine them. This draft’s second-round could include some of the following players.

Eric Paschall, 6’8″ 255 pounds, out of Villanova. A four-year player in college, Paschall is athletic and can run the floor.

Ty Jerome, 6’5″ 195 pounds out of Virginia. The slight build of Ty Jerome may keep him out of the first round. But his basketball savvy as the point guard for the national champion Virginia Cavaliers will land him on a roster.

Dylan Windler, 6’8″ 220 pounds out of Belmont. Belmont met defensive-minded Maryland in the first round of the Big Dance. While the deeper Terrapin squad wore down the Terriers, Dylan Windler caught the eye of the nation by scoring 35 points and grabbing 11 boards in the loss.

That’s Gildshire’s list of players to watch for as you watch the 2019 NBA Draft. Enjoy watching young players’ dreams come true. It’s the best part of any draft in any sport.

The Best Books for Your 2019 Summer Reading