An airbag saves lives. That’s what we expect from them.  By all accounts, they have saved tens of thousands of lives since coming into common usage in the late ’80s. Front airbags became the law beginning in 1994, and side curtain airbags became the law four years later. The vehicular add-on ought to be a success story told by regulators and automakers alike. Except that things like this keep happening.

Toyota announced this week that it is recalling more than 70,000 Lexus’ and Toyotas in North America. Why would they do such a thing? They have to replace faulty airbag inflators because the ones they installed could explode, hurling shrapnel at passengers and drivers alike. No one wants to have their family vacation interrupted by Dad’s decapitation. 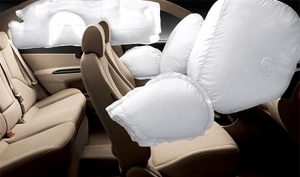 A vehicle with multiple airbag deployment.

Takata Corp. used ammonium nitrate to create an infinitesimally small explosion that inflated the bags. However, modern-day tests have confirmed that ammonium nitrate is capable of too-fast deterioration. The degradation can cause an unexpected explosion that blows apart the metal canister holding the bag. This issue caused the earlier industry-wide recalls.

Some Lexus and Toyota vehicles answered the first recall. At that time the inflators were replaced, but the replacements still used the offending ammonium nitrate. In this latest recall, the carmaker promises to use a safer firing mechanism, and one made by another company, leaving Takata out of the loop. Takata has sought bankruptcy protection after the first wave of product recalls.

Owners can expect notification in January-March next year. The replacement parts are already here for some of the cars and will be here soon for the others. The United States accounts for 65,000 recalled cars and trucks.

Between 20-25 people perished due to premature inflation by Takata Corp. air bags. The deaths and resulting outcry resulted in the most comprehensive recall in U.S. automotive history. The recalls have already covered 37 million cars and trucks, and more than 50 million inflators in the U.S. alone. Over 100 million inflators are subject to worldwide recall.

Gildshire watched with horror the first major airbag carnage reports. We will stay atop this story, as well.