2022 US Open – Winners and Losers of the First Week

2022 US Open Winners and Losers of the First Week

This year 2022 US Open was built as a tournament for Serena Williams and that is what was really on the first week. Serena’s posters, magazines, video clips were seen all over the USTA Billie Jean King National Tennis Center. It was a great success for the USTA. All days while Serena was playing were sold out. Fans flocked to see her as this might be her last tennis tournament in her illustrious career. Overall she won 23 Grand Slam titles including 6 of the US Open. Serena lost eventually in the 3rd round, but the crowd was always on her side.

As per other players in the women’s draw, there are real winners and the most important of them is Coco Gauff. She is playing tennis of her life. She is strong and she is hungry for the title. Other notable winners of the first week are Jessica Pegula who never reached the 4th round at the Open before. Overall there are 4 US women who reached the 4th round. 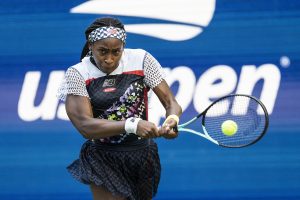 Coco Gauff is playing tennis of her life.

World number 1 Iga Swiatek is also still on the draw where she like Coco did not drop a set as of yet. Potentially they could meet each other in the final and that could be a blockbuster match everyone would love to see.

In the men’s draw, clear winners are Rafael Nadal and Daniil Medvedev, both are having a good time under the lights. However in the next round they will have a real test by playing Francis Tiafoe and Nick Kyrgios respectively. If Nick has never reached the 4th round at the Open before it is the third time in a row for Francis. Could it be third is a charm? We will find out on September 5. Also, Francis is the only American player who reached the 4th round this year.

On the loosers side there are both finalists from last year Fernandez and Raducanu who both lost in 2nd and 1st round respectively. We also should mention Sloane Stephens who lost to world number one Iga Swiatek.

Most notable among the losers on the men’s side is the absence of Novak Djokovic. He is unvaccinated and was denied entry to the United States as per CDC rules. That was the second Grand Slam of the year he missed because of that.